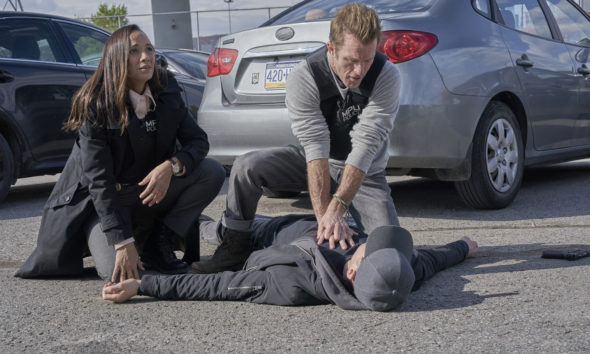 Jason and Nikki’s search continues in the first season of the Alert: Missing Persons Unit TV show on FOX. As we all know, Nielsen ratings typically play a big role in determining whether a TV show like Alert is cancelled or renewed for season two. Unfortunately, most of us do not live in Nielsen households. Because many viewers feel frustrated when their viewing habits and opinions aren’t considered, we invite you to rate all of the first season episodes of Alert here.

A FOX police procedural drama series, the Alert: Missing Persons Unit TV show stars Scott Caan, Dania Ramirez, Adeola Role, Ryan Broussard, and Graham Verchere, with Petey Gibson and Fivel Stewart in recurring roles. The story revolves around the personnel and investigations of the Philadelphia Police Department’s Missing Persons Unit (MPU). The unit is headed by Nikki Batista (Ramirez) whose marriage to Jason Grant (Caan) deteriorated after their son Keith (Verchere) went missing six years ago. Now working as a private investigator, Jason receives a possible “proof of life” photo that Keith may still be alive. As a result, Nikki recruits him to join the unit. At the MPU, they work alongside a team of highly skilled individuals. Mike Sherman (Broussard) is Batista’s current love interest and they met when he was assigned to oversee the search for Keith. Kemi Adebayo (Role) is proficient in many languages, highly discerning of visual clues, and uses her know-how as a shaman to take a holistic approach to her job. There’s also forensic anthropologist C (Gibson), who is a master at reconstructing the faces of those who have disappeared. Together, the team works to find the missing, abducted, or kidnapped before it’s too late and reunite them with their loved ones.

What do you think? Which season one episodes of the Alert: Missing Persons Unit TV series do you rate as wonderful, terrible, or somewhere between? Do you think that Alert should be cancelled or renewed for a second season on FOX?

I like the show so far, although I’m not sure the young boy is theirs. I think something else is going on for sure. I will definitely be watching. I loved Hawaii 5-0 and was sorry it was cancelled, so this is a new one to be vested in.

I think it’s pretty good I’m sure we’re all looking for answers on the kid they think is there Son? I don’t think it is but it might be a set up

Redundant
Hey there are so many “CSI-FBI-NCIS” Shows already I’m bored. Scott was awesome in Hawaii five I but this is below his level. Also do not like his costar. I cannot vision her as an agent. My opinion this show will not make it….dull.

I agree with Sherry. The 1st episode was just Ok. Nothing special about it. I’ll stay with it to see if it improves.

For me the first episode was pretty crappy. The way it played out, seemed ridiculous. To me it all should’ve been more serious than it was. I just kept shaking my head. I sure hope it gets better. I like all the actors, but definitely not the writers.

For me the first episode was just “ok”. Will watch a couple more to see if it improves. Doubtful I will watch long term.