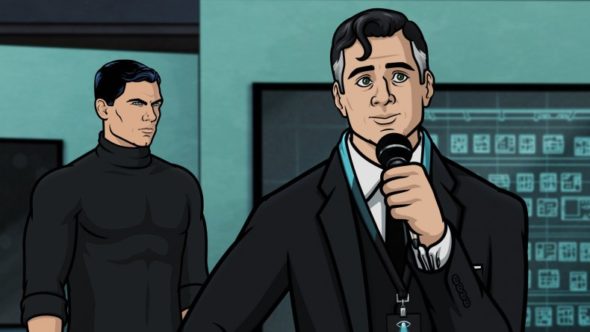 Sterling and his co-workers have a new employer in the 13th season of the Archer TV show on FXX. As we all know, the Nielsen ratings typically play a big role in determining whether a TV show like Archer is cancelled or renewed for season 14. Unfortunately, most of us do not live in Nielsen households. Because many viewers feel frustrated when their viewing habits and opinions aren’t considered, we invite you to rate all of the 13th season episodes of Archer here.

An FXX animated spy comedy, Archer stars the voices of H. Jon Benjamin, Aisha Tyler, Judy Greer, Chris Parnell, Amber Nash, Adam Reed, and Lucky Yates. Guests include Kenan Thompson, Alison Pill, Christian Slater, Kayvan Novak, and Stephen Tobolowsky. The show follows the exploits of a group of dysfunctional secret agents and the supporting staff of the International Secret Intelligence Service (ISIS). In season 13, The Agency has been acquired by the spy conglomerate known as IIA (International Intelligence Agency). As Archer (Benjamin) and the gang struggle to find their identity while performing odd missions for Fabian Kingsworth, one question arises: will they be able to maintain independence, or will they succumb to their corporate overlords?

What do you think? Which season 13 episodes of the Archer TV series do you rate as wonderful, terrible, or somewhere between? Do you think that Archer should be cancelled or renewed for a 14th season on FXX?

I have enjoyed Archer daily since it first became available in the U.K. Even after repeated viewings each episode and series offers fresh vignettes or one liners guaranteed to raise a fresh laugh. There is no sign whatsoever of the writing team running out of steam so we are wholeheartedly in favour of continuing the scrapes, japes and escapades of our dear friends.