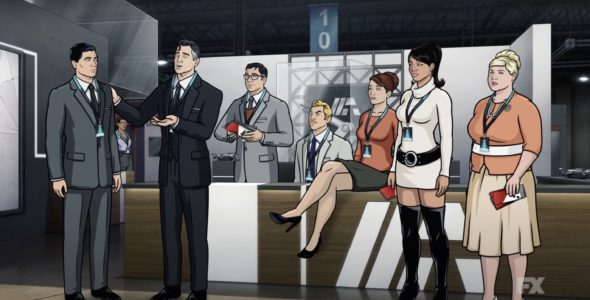 This may be Sterling’s biggest challenge yet. Has the Archer TV show been cancelled or renewed for a 14th season on FXX? The television vulture is watching all the latest cancellation and renewal news, so this page is the place to track the status of Archer, season 14. Bookmark it, or subscribe for the latest updates. Remember, the television vulture is watching your shows. Are you?

Airing on the FXX cable channel, the Archer TV show stars the voices of H. Jon Benjamin, Aisha Tyler, Judy Greer, Chris Parnell, Amber Nash, Adam Reed, and Lucky Yates. Guests include Kenan Thompson, Alison Pill, Christian Slater, Kayvan Novak and Stephen Tobolowsky. The show follows the exploits of a group of dysfunctional secret agents and the supporting staff of the International Secret Intelligence Service (ISIS). In season 13, The Agency has been acquired by the spy conglomerate known as IIA (International Intelligence Agency). As Archer (Benjamin) and the gang struggle to find their identity performing odd missions for Fabian Kingsworth, one question arises: will they be able to maintain independence, or will they succumb to their corporate overlords?

The 13th season of Archer averages a 0.11 rating in the 18-49 demographic and 286,000 viewers. Compared to season 12, that’s up by 21% in the demo and up by 25% in viewership in the live+same day ratings (including DVR playback through 3:00 AM). While these numbers don’t include further delayed or streaming viewing, they are a very good indicator of how a show is performing, especially when compared to others on the same channel. There can be other economic factors involved in a show’s fate, but typically the higher-rated series are renewed and the lower-rated ones are cancelled. Find out how Archer stacks up against other FXX TV shows.

Will FXX cancel or renew Archer for season 14? This animated series just keeps chugging along. It’s won four Emmy Awards, typically gets positive reviews, and does pretty well in the ratings. It’s also one of the few original scripted series on FXX. I suspect it makes good financial sense to keep it going. I’ll update this page with breaking developments. Subscribe for free alerts on Archer cancellation or renewal news.

What do you think? Do you hope that the Archer TV show will be renewed for a 14th season? How would you feel if FXX cancelled this TV series, instead?