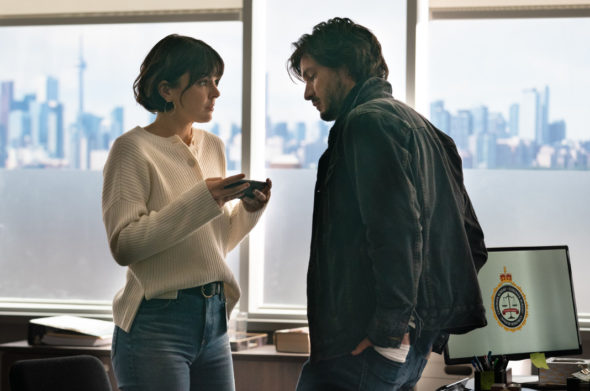 It was announced last month that the Coroner TV series would be returning to The CW this summer for its fourth season. Those plans have now changed and U.S. viewers won’t see the episodes for several months.

A procedural crime drama that originates on CBC in Canada, the Coroner TV show stars Serinda Swan, Roger Cross, Éric Bruneau, Ehren Kassam, Nicholas Campbell, Tamara Podemski, Andy McQueen, Kiley May, Mark Taylor, and Uni Park. The series follows the life of recently widowed Doctor Jenny Cooper (Swan), a newly appointed coroner who investigates any suspicious, unnatural, or sudden deaths in the city of Toronto. Jenny taps into her intuition, as much as her intellect and heart, as she solves cases. In season three, Jenny must move past her trauma and embrace her whole self. In the process of healing, she and live-in boyfriend Liam (Bruneau) are now separated and separately trying new forms of therapy. With Liam gone, Jenny finally has space to focus on herself — for all of five minutes. It isn’t long before death knocks at her door with a slew of new cases — both COVID-related and not — that force her to unleash the real Jenny Cooper locked inside. Meanwhile, Detective Donovan McAvoy (Cross) stares down the barrel of his own mortality in a very personal way, which propels him to investigate both his cases and his life with a new perspective. He may even find love. Ross (Kassam) confronts uncomfortable identity challenges, and Gordon’s (Campbell) Lewy Body Dementia causes him to lose himself in the possibility of a life once lived.

Airing on Thursday nights last fall, the third season of Coroner averaged a 0.08 rating in the 18-49 demographic and 635,000 viewers in the live+same day ratings (includes all DVR playback through 3:00 AM). Compared to season two, that’s down by 16% in the demo and down by 7% in viewership.

The fourth season finished airing in Canada in April and the episodes were set to begin airing on The CW next Thursday, June 2nd. However, the network recently announced its Fall 2022 schedule and Coroner is on it. The drama will debut at some point this fall, likely in October, and will air on Sunday nights. There are 12 episodes in the season.

The network didn’t explain the reason for the delay but it’s likely tied to The CW being up for sale and the cancellation of several shows earlier this month. With less original scripted content to populate the fall schedule, the execs have opted to delay Coroner’s return.

What do you think? Do you enjoy watching the Coroner TV series on The CW? Are you disappointed that the network has delayed the fourth season?

Great series. Don’t cancel. Every episode is interesting, holds ones interest. Great acting by all the cast.

I love watching the Coroner on the CW. Very disappointed that they will
make us wait for Season 4 until Fall. I am hoping some network will pick up the show so that we can have more seasons in the future.

I love The Coroner. I usually binge watch so I wait for numerous episodes to air. I really hope they will air it maybe with their fall shows. It would be sad if they didn’t.

I’m very disappointed that Coroner has been delayed. It’s C300one of my favorite shows! I really hope it doesn’t end up being moved to a streaming service I don’t have. I’m SO upset that several of my favorite shows, like Legacies & Batwoman & Naomi, Roswell, New Mexico, In the Dark, etc.

We were excitedly looking forward watching The Corner. So disappointed we have to wait another four months. Will patiently wait for it.

Not happy they pushed this back and waited until the last minute to change it.

I can’t believe you pushed Coroner to the fall!!! Cruel!!!

The CW has cancelled several shows that I watched weekly. I am disappointed that Coroner won’t air for a year after originally aired in Canada.

Disappointed! Being able to read the episode summaries just makes it worse.

Disappointed. I had it on my calendar. One of my favorite shows!