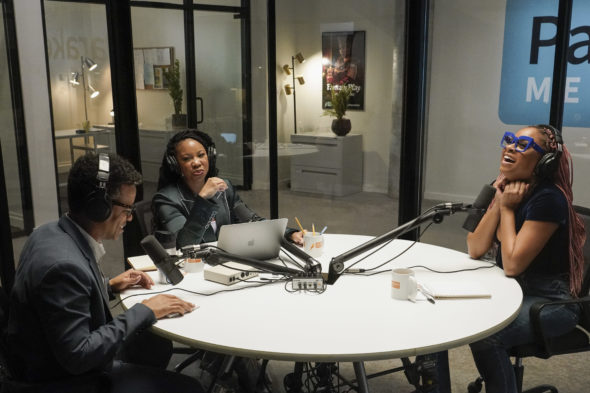 It looks like Phoebe’s life may be changing. Has the Everything’s Trash TV show been cancelled or renewed for a second season on Freeform? The television vulture is watching all the latest cancellation and renewal news, so this page is the place to track the status of Everything’s Trash, season two. Bookmark it, or subscribe for the latest updates. Remember, the television vulture is watching your shows. Are you?

Airing on the Freeform cable channel, the Everything’s Trash TV show is written and executive produced by its star, Phoebe Robinson. The series also stars Jordan Carlos, Toccarra Cash, Nneka Okafor, and Moses Storm. The story follows Phoebe (Robinson), a 30-something outspoken podcast star making her professional mark and sharing her views on money, politics, body image, and everything in between. She’s thriving (kind of) while living a broke and messy life in Brooklyn. Significant people in Phoebe’s life are Michael (Storm), her offbeat best friend and roommate who’s also a video game live-streamer, and Malika (Cash), Phoebe’s savvy and smart producer. She’s also very close with her “perfect” older brother, Jayden (Carlos), though they live very different lives. He has an upper-middle-class family life with his socialite-turned-feminist and professor wife, Jessie (Okafor). Phoebe tries to be on her best behavior when Jayden runs for political office but that’s easier said than done. She definitely moves to the beat of her own drummer.

The first season of Everything’s Trash averages a 0.03 rating in the 18-49 demographic and 67,000 viewers in the live+same day ratings (including DVR playback through 3:00 AM). While these numbers don’t include further delayed or streaming viewing, they are a very good indicator of how a show is performing, especially when compared to others on the same channel. There can be other economic factors involved in a show’s fate, but typically the higher-rated series are renewed and the lower-rated ones are cancelled. Find out how Everything’s Trash stacks up against other Freeform TV shows.

Will Freeform cancel or renew Everything’s Trash for season two? The cable channel appears to be beefing up its slate of originals once again. Even though the traditional ratings are quite low, Disney is clearly taking a long-term approach so the company has lots of different programming for its streaming outlets. I think this show has a good chance of being renewed and I’ll update this page with breaking developments. Subscribe for free alerts on Everything’s Trash cancellation or renewal news.

What do you think? Do you hope that the Everything’s Trash TV show will be renewed for a second season? How would you feel if Freeform cancelled this TV series, instead?