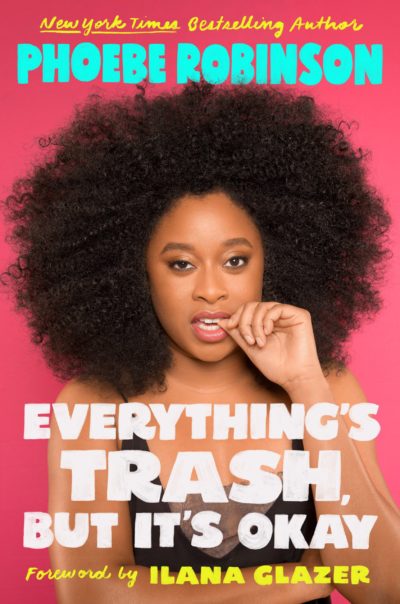 Everything’s Trash is headed to Freeform. Created by and starring Phoebe Robinson, the series follows “Phoebe, a 30-something podcast star navigating her messy life.” The show is based on Robinson’s book, Everything’s Trash, But It’s Okay.

Freeform revealed more about Everything’s Trash in a press release.

Starring Robinson and inspired by her bestselling book “Everything’s Trash, But It’s Okay,” the series follows Phoebe, a 30-something podcast star navigating her messy life. Forced to grow up when her older brother Jayden emerges as a leading political candidate, she relies on her friends and close-knit family to help her figure out adulthood.

“Phoebe has one of the most unique and hilariously sharp voices in the business,” said Tara Duncan, president, Freeform and Onyx Collective. “Everything’s Trash is the perfect addition to the Freeform slate, bringing a distinct point of view to a woman navigating adulthood on her own terms.”

“I feel like Whoopi Goldberg’s choir at the end of Sister Act 2 when they won the competition! Overjoyed! Stunned! Extremely grateful!” said Robinson. “We’re going to make something special that you won’t want to miss.”

The series also stars Jordan Carlos (First Wives Club) as Jayden, Phoebe’s extremely intelligent, Blerd-y older brother with big dreams for his community, who has recently emerged as a leading political candidate. Their boundary-less relationship must change as Phoebe’s wild yet entertaining behavior threatens to overshadow his Barack Obama-esque aspirations.

Toccarra Cash (Station 19, Younger) will portray Malika, Phoebe’s savvy, smart and beautiful “code-switch queen” podcast producer. As Phoebe’s work wife and ride-or-die friend, Malika tries to balance wanting Phoebe to grow up with encouraging her to be messy because, hey, the mess pays the bills and is funny AF. Nneka Okafor (God Friended Me) will portray Jessie, Phoebe’s sister-in-law, who’s a former socialite-turned-feminist and college professor. Jessie worries that she is the only one in her in-laws’ family that has the strength to let Phoebe know that some of her shenanigans are dangerous to her husband’s career and too influential on her daughter. Moses Storm (Sunnyside) will portray Michael, Phoebe’s BFF, roommate and friend since freshman year of college. He is a video game livestreamer who is not ashamed to promote his TikTok whenever he can. Michael is more than happy not to grow up and will be the playful devil on Phoebe’s shoulder.

Robinson’s book, Please Don’t Sit on My Bed In Your Outside Clothes, was released on Sept. 28, 2021 under her imprint Tiny Reparations Books.”

What do you think? Are you planning to check out Everything’s Trash on Freeform?