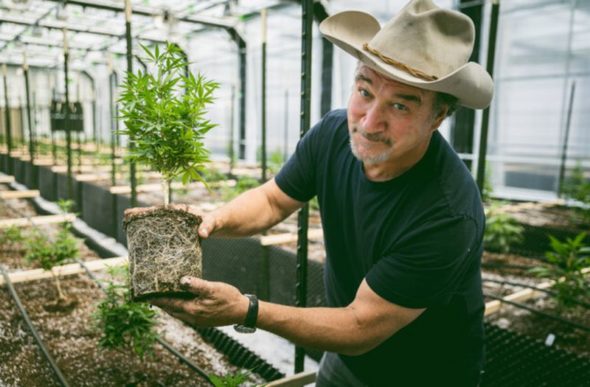 “Ain’t no mountain high enough for Jim Belushi! After growing his passion into a successful and bustling business, Jim and his team of farmers are on a mission to rebrand and rebuild their cannabis farm from small and boutique to premium high-end for the masses. In an effort to meet increasing national demand, they’re bringing state of the art technology, cultivation methods, new equipment and new facilities to Belushi’s Farm – and the results are as promising as they are challenging. It’s a season all about regrowth and growth, and we’ve got high hopes for Belushi’s Farm!

“In this season of GROWING BELUSHI, you’ll witness my evolution from hobby boutique cultivator to multi-state business operator. This year is not only about the expansion of our business, but our mission to spread awareness about the plant as a pathway to healing,” said Belushi. “And, you’ll learn about the burgeoning industry, how it intersects with politics and how I handle the pressure — between weathering the elements, rebuilding the farm, and overseeing Chris’ new restaurant…. well, there are many challenges to tackle with laughs along the way.”

This season, the crew is faced with the challenge of farming — weather, mold, pests — and re-growing their unique proprietary strains after they were destroyed last season (blame Jim!). With the help of some friends and familiar faces — including Dan Aykroyd, Larry Joe Campbell, Guy Fieri, and cousin Chris — it’s a joint effort to get things back on course and achieve greatness within the competitive world of cannabis.

And of course, there are many new adventures, such as cousin Chris building and operating a tiny restaurant with one table on the farm called the Engjell Café, which introduces a whole new element of stress and comedy as Chris experiments with cannabis-infused cuisine. As Jim likes to say with a smile, “Reservations are tough, the food is great, but with one table and free food, the Engjell Cafe is the most exclusive restaurant in southern Oregon. The only problem is the owner is a pain in the a**.”

This unique brand of edutainment is equally funny as it is informative. GROWING BELUSHI sheds light on Jim’s journey of self-discovery and the incredible effort it takes to build and operate a legal medicinal cannabis farm with the dream of helping others on their pathway to heal and thrive.

What do you think? Are you a fan of Growing Belushi on Discovery? Do you plan to watch season two?

I am excited for season 2 of growing Belushi. Love you Jim and crew. I love Discovery + channel. Hope you climb many mountains Jim!

Love the show got last 2 record and been waiting for some time.

The first season of growing Belushi was very informative, as well as entertaining.
Really looking forward to viewing season 2.