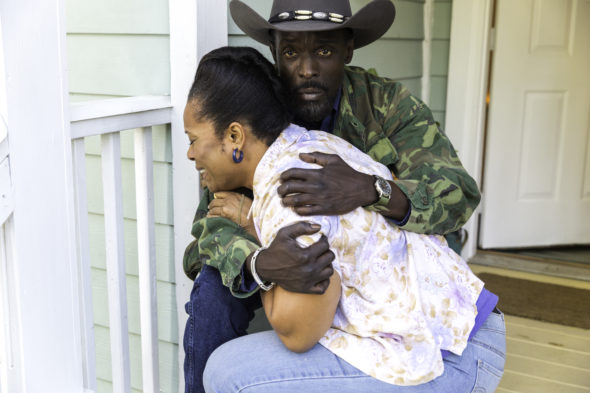 They’re back and wearing their dancing shoes. SundanceTV has announced the third season premiere of its Hap and Leonard TV show. Hap and Leonard: The Two-Bear Mambo, will debut on Wednesday, March 7, 2018 at 10:00pm ET/PT. Watch a teaser, below. The darkly comedic crime drama is a TV adaptation of the Joe R. Lansdale novels.


Ho, Ho, Ho! Here's a holiday gift from #HapAndLeonard: the premiere date for #TwoBearMambo is Wednesday, March 7 on @SundanceTV! pic.twitter.com/51KYVqgkaq

According to star James Purefoy, production on the third season ended just ahead of Thanksgiving. Check it out.

IT TAKES TWO TO MAMBO!

Set once again in East Texas just before Christmas of 1989, Hap and Leonard scramble to locate Florida Grange, who has gone missing in the Klan-infested town of Grovetown. Once again at the center of an impending storm of Biblical proportion, Hap and Leonard find themselves at odds with a cast of characters so tough they could chew the bumper off a pickup truck, including a possibly corrupt sheriff, and the leader of the Caucasian Knights. The boys learn that the good guys don’t always win, and nobody beats Mother Nature.

What do you think? Have you watched the first two season of the Hap and Leonard TV show? Do you plan to check out season three on SundanceTV?