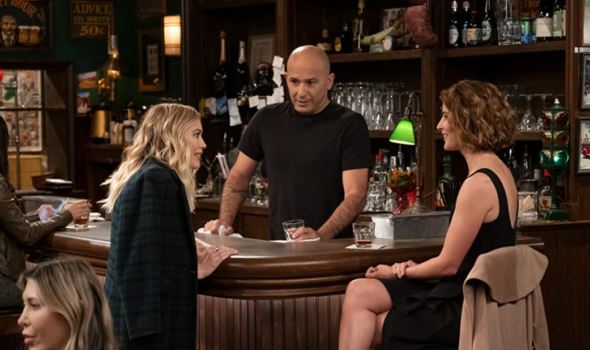 How I Met Your Father has returned for its second season on Hulu, and viewers are seeing another main character from How I Met Your Mother return. SPOILER ALERT. In the premiere, viewers saw Neil Patrick Harris reprises his role as Barney Stinson. Sophie (Hilary Duff) rear-ended his car during the episode.

Harris is the second member of the original cast to appear in the sequel series. Colbie Smulders (above, right) appeared during the first season. Barney will pop up in more season two episodes and play a key role.

Starring Duff, Christopher Lowell, Francia Raisa, Tom Ainsley, Tien Tran, and Suraj Sharma, the Hulu series follows Sophie as she goes through her journey to find “the one.”

Isaac Aptaker and Elizabeth Berger, creators of How I Met Your Father, revealed more about Harris’ appearances in an interview with TV Line. Berger said the following:

“As soon as we started breaking our season, we all got very excited about the idea of having him return. Thankfully, his relationship with [HIMYM and HIMYF director/executive producer] Pamela Fryman is so phenomenal that she was able to reach out to him and get a very quick, ‘Let’s talk about it.’ We did a creative Zoom with him to talk about what we were thinking, and that was it. He was game, which was so incredible for us. It was the best way we could imagine coming back.”

“Whenever we talk about bringing back a member of the original crew, you want it to serve two purposes: You want to give some tidbits about what is going on in their lives, where they’ve landed and where they’re at, but it’s also about how they impact the How I Met Your Father story, and how they send one of our characters in a new, unexpected direction. Similar to Robin last year, we’ll learn some more about where Barney’s at, but it’ll also have a major impact on the trajectory, and main narrative, of our season.”

Season two episodes of How I Met Your Father will continue to be released on Tuesdays on Hulu. The streaming service has ordered 20 episodes.

What do you think? Are you excited to see more of Barney on future episodes of How I Met Your Father?