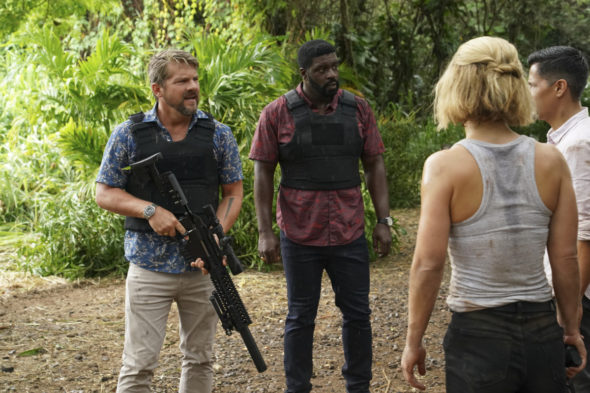 Will this island paradise get even more beautiful and dangerous in the third season of the Magnum PI TV show on CBS? As we all know, the Nielsen ratings typically play a big role in determining whether a TV show like Magnum PI is cancelled or renewed for season four. Unfortunately, most of us do not live in Nielsen households. Because many viewers feel frustration when their viewing habits and opinions aren’t considered, we invite you to rate all of the third season episodes of Magnum PI here. *Status Update Below.

A CBS action-adventure series, Magnum PI stars Jay Hernandez, Perdita Weeks, Zachary Knighton, Stephen Hill, Tim Kang, and Amy Hill. This reboot of the 1980s TV show follows Thomas Magnum (Hernandez), a decorated former Navy SEAL who repurposes his military skills to become a private investigator. He lives in a guest cottage on Robin’s Nest, the luxurious estate where he works as a security consultant to supplement his P.I. business. The “majordomo” of the property is Juliet Higgins (Weeks), a beautiful and commanding disavowed MI:6 agent who keeps Magnum in line. When Magnum needs back-up on a job, he turns to his trusted buddies and fellow POW survivors, chopper pilot Theodore “TC” Calvin (Hill) and Orville “Rick” Wright (Knighton), a former Marine door-gunner who now runs a nightclub. Magnum frequently has run-ins with police detective Gordon Katsumoto (Kang) and the two are more alike than either cares to admit. The unofficial “House Mom” and cultural curator of Robin’s Nest, Teuila “Kumu” Tuileta (Hill) is also one of Magnum’s biggest fans.

What do you think? Which season three episodes of the Magnum PI TV series do you rate as wonderful, terrible, or somewhere between? Do you think that Magnum PI should be cancelled or renewed for a fourth season on CBS? Don’t forget to vote, and share your thoughts, below.

I really enjoy this show! Simply one of our family favorites and yes I would like to see it renewed for many years to come!

love this show! I enjoy the story as well as the characters and their friendships. The right amount of action, and humor. Hope they get renewed for another year, and many more.

Just like the original Magnum PI series…. i am hardcore fan of this series as well…… From the original theme song to the end of the show… The cast, the plots , the laughs, the cars and as someone mentioned “Hawaii ” …. really all around great job on the show … you’ve got my 2 thumbs up… Keep it going !!!

Please renew it. Great characters with interesting relationships. And the scenery…well, what can you say? It’s Hawaii.

Really like this show and never miss an episode. I record it if I can’t wait it live. I like all the characters and their interaction with each other. Right amount of suspense and humor and tensions. Please keep renewing Magnum PI!

Like this show, quite funny and relaxing, good chemistry between actors, some good action scenes.

One of my favorite shows and hope it is renewed for many more seasons. I am a faithful viewer and never miss an episode. In my opinion this show is almost better than the original Magnum from the 80s.
Highly entertaining & a wonderful cast of actors except for Jin who adds nothing to the show. Magnum & higgins make a perfect team. I love to watch Higgins in the fighting scenes.

Love the show! Characters are all well cast. Just have a problem understanding Perdita sometime! Not used to the accent, I guess. Would like to see Juliet & Magnum get together at some point!

hate the show and the actors are awful.

As much as I enjoyed seasons one and two, I have been disappointed in season three because the background music has made it almost impossible to hear what the actors were saying.

My only complaint is the background music. It is impossible to focus on the show as the music overtakes everything. I have Season 1 and 2 and a bunch of these segments are same. Really hate that music. No reason for it.

Really love Magnum PI. Don’t cancel. The actors all compliment each other. They can make me do a belly laugh when something is funny. Thoroughly enjoy this show. The casting is spot on. The action is great. And of course Hawaii.

Please don’t cancel, I use to work on the set of the original Magnum PI when I lived in Wamanao about a half-mile from Robin Masters estate. I like the scenery of the show and they film in some of the same places. I enjoy the new Magnum very much.