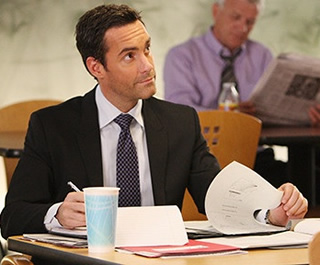 Last spring, ABC renewed venerable comedy Scrubs and newbie Better Off Ted, despite their low ratings. Now that they’re back, the network is in a hurry to get rid of them.

Based simply on the ratings, neither ABC sitcom should have been renewed last season. Scrubs had dwindled to an average of 4.97 million viewers and a 2.2 rating in the 18-49 demographic. It was ultimately saved because ABC’s production studio produces the show and another season would bring more money in syndication.

Last May, Better Off Ted had only aired half of its completed episodes and was averaging a disappointing 1.76 rating and 4.39 million. Though the ratings were quite low, ABC decided to bring the sitcom back for another season. The network programmers supposedly liked the pairing of Ted and Scrubs and hoped that the ratings would improve. When the network began airing the rest of Ted’s first season during the summer, the ratings dropped much further, to an average of 0.74 in the demo and 2.09 million viewers.

The sitcoms have now both returned for the 2009-10 schedule and the ratings are still terrible. Scrubs kicked off this season with a low 2.0 rating in the demo and only 4.5 million viewers. The numbers have dropped since then and last Tuesday’s episode brought in a 1.8 rating and 4.26 million.

To little surprise, ABC has decided to burn off the unaired episodes of both series as quickly as possible. Single installments of each sitcom will air tomorrow night and on the 29th. On New Year’s Day, two episodes of Ted and one of Scrubs will follow the Rose Bowl Game. Then, beginning on January 5th, two installments of each sitcom will run on Tuesday nights. By the end of the month, both sitcoms are expected to have run through their full 13 episode orders.

While the network hasn’t indicated that either series has been cancelled, the decision to burn through the seasons in 60 days certainly isn’t a vote of confidence. Neither Scrubs nor Ted is expected to return, especially in light of the much better performance from newcomers Modern Family and Cougar Town.

What do you think? Do you think Better Off Ted and Scrubs will be cancelled? Will you be sorry to see either one end?

I hope not. I thought Scrubs ended well, so I wouldn’t be upset to see that go again, though if it stays i’d be happy. But Better Off Ted is definitely one of my favorite shows, so I hope that stays on.

i wonder if abc checks the hulu ratings, or if the ratings are available to anyone besidues hulu. i don’t even watch tv anymore. i just watch hulu. AND I ALWAYS WATCH SCRUBS AND BETTER OFF TED. ABC is f-ing ridiculous for cancelling these shows.

although, for the record, i do adore modern family, which i also watch on hulu.

cougartown is awful. i love courtney cox, but i cringe watching her trying to play someone who makes people cringe… if ya know what i mean.

Have never paid much attention to scrubs but watch Better Off Ted every time it is on. It is the best comedy since Arrested Development and is on par with 30 Rock. What a shame that the american public is too stupid to appreciate it.

No, not Scrubs!! I don’t particularly care for the rest of the shows, but this one should stay.

And of course – “chould” should say “could”.

Deeply disappointed to hear this about Better Off Ted – I’ve managed to see every episode so far all the way from Australia. It’s been a joy to watch: smart writing, good acting and fast one-liners with a dash of quirkiness. Shame if another network (or cable) doesn’t take a gamble on it – it will be a premature end to what chould have been a long-running show.

ABC you bunch of morons! Better Off Ted has a cult following, much the same way Scrubs did when it first came out and it took a few years to build up to what Scrubs eventually became. Better Off Ted is one of the best shows on TV and if it is having poor rating itis because of time slot and lets face it, non existant advertisment. ABC, don’t be stupid by keeping the cookie cutter cr@p and doing away with original shows that people truely love like BOT. You don’t have that much to fall back on in the… Read more »

BOT having problems is completely the fault of the network. Between the lack of advertising at any point in its run and the time slot it is thrown in it was never given a fair shot. IF I ever mention the show no one has heard of it. It is not the fault of the show, the actors, or the writers, but the network. ABC failed the show and I would only hope that such an awesome show could be picked up a network that would treat it better.

Scrubs probably should nont have been bought back. The ending last year was amazing and that should have been that.

Better Off Ted is a great, smart comedy but I fear it may be a bit too over the head for most audience members, a la Arrested Develpoment and this will keep the viewers away.

So disappointing. Finally, in the age of reality tv, where on every channel I can watch people dance or sing or frolic on some island there was a show I actually would watch! I love Better Off Ted!! I can tell ABC that while I am one of the “few” viewers to watch Ted, I will not be among those watching Modern Family or CougarTown, or any of the reality tv shows I have been presented as of late. I will go back to finding re-runs of the shows I liked (you know, back when there were shows with plots… Read more »

After Scrubs is such a pale imitation of the original series it’s painful to watch. They should have let it just go after the great finale last spring.

Hello, I think both shows should not have been renewed I think they should have left scrubs the way it was with JD Leaving and that awesome montage I think renewing it was a bad decision especially since they are running it as part of a med school. While a great idea that should have been done as a spin off rather then calling it scrubs. As much as I love scrubs they should have ended the show in the fashion they did. Better off Ted I have never seen more then 5 min of just because of my pvr… Read more »

Better off Ted is one of the best shows on right now. Where the &#$@ do they get their ratings from??

I LOVED Better off Ted, it is one of th funniest shows on tv, I would hate to see it go. The cast is one of the best and Jay Harrington is a breath of fresh air.

This is hardly surprising but, in the case of Ted, deeply disappointing. ABChas never really given eit uch of a break and would have been better off saving the summer installments to run with the new batch in a more high-profile spot. Scrubs, which ended wonderfully last year, has been halfway decent this year but hardly appointment TV, and yoking Ted to it has not helped that show at all (nor have the DECEMBER season premire dates, when everything else is in repeats because the networks KNOW no one watches TV during the holiday period.) I think ABC is making… Read more »