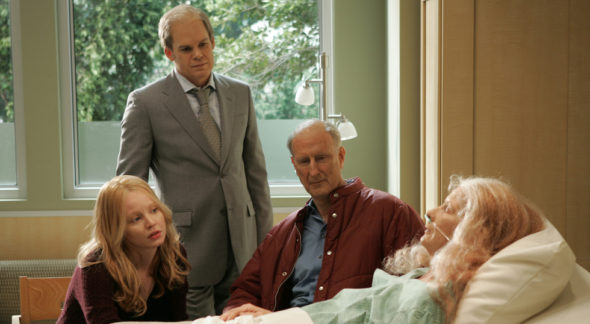 Six Feet Under may return to HBO. A sequel or reboot for the family drama series is now in early development. The original show aired for five seasons and 63 episodes between 2001 and 2005. Creator Alan Ball and executive producers Bob Greenblatt and David Janollari are all involved in the new project, per Variety. The original series follows the Fisher family as they live their lives while running a funeral home in Los Angeles.

Peter Krause, Michael C. Hall, Frances Conroy, Lauren Ambrose, Freddy Rodriguez, Mathew St. Patrick, Rachel Griffiths, and Jeremy Sisto starred in the series which was a hit with critics and viewers. The show had a memorable series finale as its final moments showed how each member of the family died in the future. Ball went on to create True Blood for HBO after Six Feet Under wrapped.

The project is in the early stages, so details are limited.

What do you think? Did you watch Six Feet Under on HBO? Would you watch a new reboot of the series if it is picked up?

No thank you. The series ended perfectly.

There’s nothing you can about it. It’s like I always said in experience, nothing from past seasons last forever. And what you said was exactly what someone else said about the Proud Family. And now look how it’s getting revived as well.

The series finally is listed as one of the best in television history. Rebooting the show wouldn’t be so exciting since we know the end results already
For everyone character. Most shows that reboot never had a good satisfying finale episode. Thus the reason to Reboot.

Best series since sopranos. Dexter is number three on my list. I loved all three bought thr dvd box set of all 3 and I no longer have a dvd player. They just mean a lot to me.

After the last episode I was sad to watch them all die. Let them rest in peace.

Not Yet Six Feet Under
Reply to  Isa

It was the best series finale I ever saw. I think I do agree though that the ending makes it difficult to conceive of a revival that doesn’t feel shoehorned into a finished plot.

Well it looks like they won’t stay dead forever.