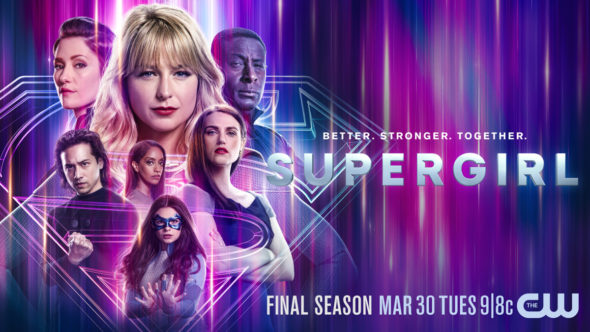 We don’t have to worry about Supergirl being cancelled by The CW this time around since it’s already been announced that season six is the end. Will the ratings rise as this superhero series gets closer to the end? Could Supergirl be revived for season seven at some point in the future? Stay tuned.

The Supergirl TV show stars Melissa Benoist, Chyler Leigh, David Harewood, Jesse Rath, Nicole Maines, Azie Tesfai, and Katie McGrath. Based on the DC Comics character, the series centers on Kara Zor-El (Benoist), the cousin of Kal-El, i.e. Superman (Tyler Hoechlin). To remain safe from Krypton’s destruction, Kara grew up on Earth as a human named Kara Danvers. For years, she kept her powers a secret. Now, as an adult, she works at CatCo Worldwide Media and also for the Department of Extra-Normal Operations (DEO), a super-secret government organization whose mission is to keep National City – and the Earth – safe from sinister threats as costumed crusader Supergirl. She’s joined in this pursuit of justice by her sister, Alex (Leigh), her mentor, Martian Manhunter (Harewood) and her friends Brainiac-5 (Rath), Dreamer (Maines), Kelly Olsen (Tesfai), and Lena Luthor (McGrath). In the sixth and final season, Supergirl is thrust into the greatest challenge of her life — forced to confront her own mortality, and the prospect of losing all hope. As her friends rally to help her in this difficult fight, a new villain arrives in National City and tests her resolve.

What do you think? Do you like the Supergirl TV series on The CW? Should it be cancelled or renewed for a seventh season?

This show SLOWLY vanishing like the very clouds Mr. MXY sits upon until he returns to.the 5th DIMENSION.Someway somehow this show plays to the end even without it`s title character who flew away with her joy and wonder a long time ago. MR. MXY with the wave of his wand making sure someway somehow we get to that ending … until SUPERMAN makes him say his name backwards.and POOF all gone doughnuts and all.

According to the ratings chart, SUPERGIRL will have o.ooo fans watching 5 weeks from now. BEST GIVE THAT SPEECH NOW SUPERGIRL !

I think people are getting bored with superhero shows in general. Flash isn’t doing all that much better. 0.886 viewers vs 0.586 viewers isn’t that huge a margin.

Has SUPERGIRL tried speech.Speech to the UNITED STATES to watch and save series ? It`s an idea I learned from her show. COULD WORK. It worked on her show every time.

You can’t save the show. Melissa is done. She’s already signed on to a production deal. It’s dead, let it go.

It’s not boring, it’s the best superhero show ever.