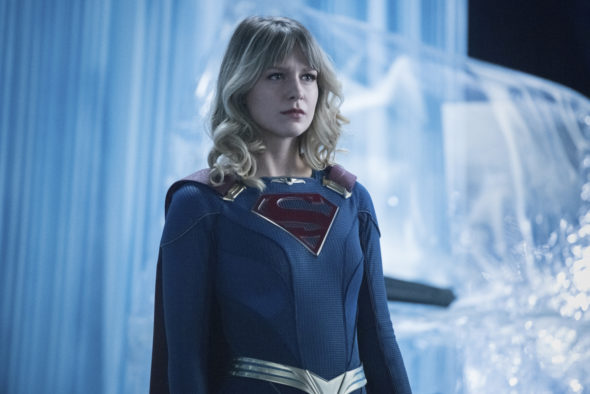 Is it time for Kara to fly into the sunset? Has the Supergirl TV show been cancelled? Renewed for a seventh season on The CW? The television vulture is watching all the latest cancellation and renewal news, so this page is the place to track the status of Supergirl, season seven. Bookmark it, or subscribe for the latest updates. Remember, the television vulture is watching your shows. Are you?

Airing on The CW television network, the Supergirl TV show stars Melissa Benoist, Chyler Leigh, David Harewood, Jesse Rath, Nicole Maines, Azie Tesfai, and Katie McGrath. Based on the DC Comics character, the series centers on Kara Zor-El (Benoist), the cousin of Kal-El, i.e. Superman (Tyler Hoechlin). To remain safe from Krypton’s destruction, Kara grew up on Earth as a human named Kara Danvers. For years, she kept her powers a secret. Now, as an adult, she works at CatCo Worldwide Media and also for the Department of Extra-Normal Operations (DEO), a super-secret government organization whose mission is to keep National City – and the Earth – safe from sinister threats as costumed crusader Supergirl. She’s joined in this pursuit of justice by her sister, Alex (Leigh), her mentor, Martian Manhunter (Harewood) and her friends Brainiac-5 (Rath), Dreamer (Maines), Kelly Olsen (Tesfai), and Lena Luthor (McGrath). In the sixth and final season, Supergirl is thrust into the greatest challenge of her life — forced to confront her own mortality, and the prospect of losing all hope. As her friends rally to help her in this difficult fight, a new villain arrives in National City and tests her resolve.

The sixth season of Supergirl averages a 0.13 rating in the 18-49 demographic and 597,000 viewers. Compared to season five, that’s down by 39% in the demo and down by 29% in viewership. Find out how Supergirl stacks up against other The CW TV shows.

We don’t have to wonder if The CW will cancel Supergirl since it’s already been announced that season six is the end. I’ll update this page with breaking developments. Subscribe for free alerts on Supergirl cancellation or renewal news.

What do you think? Do you wish that the Supergirl TV show had been renewed for a seventh season? Are you sorry that this CW is ending?

Yes, I do wish that Supergirl had been renewed for a seventh season instead of coming to an end. And I am sorry.