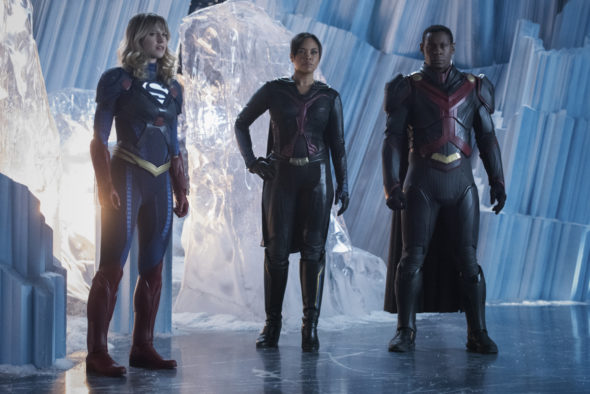 Will the Supergirl TV show on The CW have a satisfying conclusion? As we all know, the Nielsen ratings typically play a big role in determining whether a TV show like Supergirl is cancelled or renewed for season seven (in this case, we know its ending). Unfortunately, most of us do not live in Nielsen households. Because many viewers feel frustration when their viewing habits and opinions aren’t considered, we invite you to rate all of the sixth season episodes of Supergirl here.

A The CW action-adventure series, the Supergirl TV show stars Melissa Benoist, Chyler Leigh, David Harewood, Jesse Rath, Nicole Maines, Azie Tesfai, and Katie McGrath. Based on the DC Comics character, the series centers on Kara Zor-El (Benoist), the cousin of Kal-El, i.e. Superman (Tyler Hoechlin). To remain safe from Krypton’s destruction, Kara grew up on Earth as a human named Kara Danvers, and for years, she kept her powers a secret. Now, as an adult, she works at CatCo Worldwide Media and also for the Department of Extra-Normal Operations (DEO), a super-secret government organization whose mission is to keep National City – and the Earth – safe from sinister threats as costumed crusader Supergirl. She’s joined in this pursuit of justice by her sister, Alex (Leigh), her mentor, Martian Manhunter (Harewood) and her friends Brainiac-5 (Rath), Dreamer (Maines), Kelly Olsen (Tesfai), and Lena Luthor (McGrath). In the sixth and final season, Supergirl is thrust into the greatest challenge of her life — forced to confront her own mortality, and the prospect of losing all hope. As her friends rally to help her in this difficult fight, a new villain arrives in National City and tests her resolve.

What do you think? Which season six episodes of the Supergirl TV series do you rate as wonderful, terrible, or somewhere between? Do you think that Supergirl should be ending or renewed for a seventh season on The CW? Don’t forget to vote, and share your thoughts, below.

Want it renewed for season 7 ,8,9,10,11especially a story between Supergirl and Lena Luthor should be developed on romantic terms it would be good and interesting when they both as lovers fight Lex Luthor

Needs to be renewed for another season please and love watching supergirl.

I would prefer it not to end. So far season 6 has been consistent and enjoyable. However, I suspect the cast may have mew projects to pursue. 6 seasons and over 100 episodes is a good solid run.

No way! I don’t think it should be ending that soon.