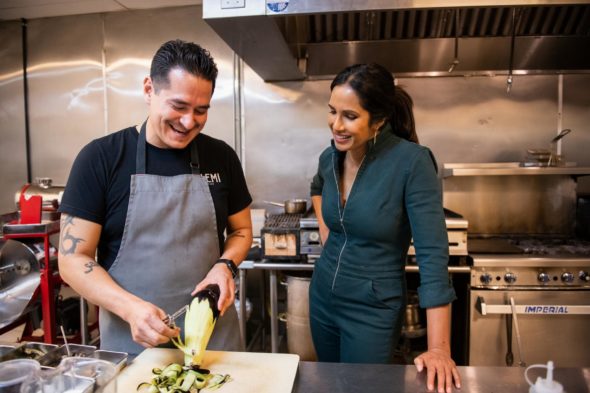 Hulu is hungry for more. The streaming service just announced they’ve ordered a second season of the TV show Taste the Nation.

The documentary series follows food writer and host Padma Lakshmi as she travels across the United States highlighting the diverse origins of the country’s food culture. Season one explored hot dogs in Wisconsin, burritos in El Paso, Indian food in New York, and more.

Hulu has ordered 10 episodes for season two of Taste the Nation. You can read more info below:

Starring and executive produced by Padma Lakshmi, along with Part2 Pictures’ David Shadrack Smith, Taste the Nation takes audiences on a journey across America exploring the rich and diverse food culture of various immigrant groups, seeking out the people who have so heavily shaped what American food is today.

From indigenous communities to recent immigrant arrivals, Padma breaks bread with Americans across the nation to uncover the roots and relationship between our food, our humanity and our history – ultimately revealing stories that challenge notions of identity, belonging, and what it means to be American.”

What do you think? Have you seen Taste the Nation? Will you watch season two of this Hulu series?

Taste the Nation is an outstanding series. I have viewed a few other food shows with my wife and usually turn away. I was seriously hoping this series would have a second season.
It is beautiful to look at and the stories so interesting.