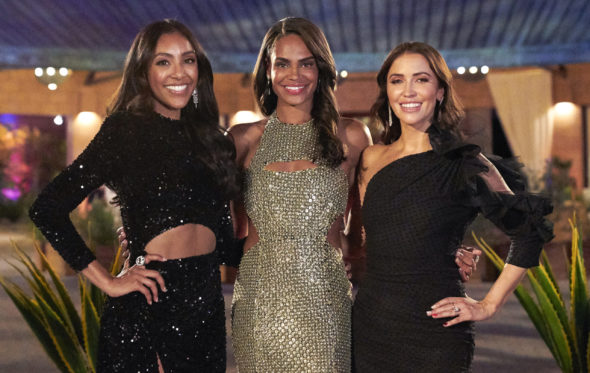 Will this season have a satisfying ending? Has The Bachelorette TV show been cancelled or renewed for a 19th season on ABC? The television vulture is watching all the latest cancellation and renewal news, so this page is the place to track the status of The Bachelorette, season 19. Bookmark it, or subscribe for the latest updates. Remember, the television vulture is watching your shows. Are you?

Airing on the ABC television network, The Bachelorette revolves around a single woman who sifts through a large group of eligible male contestants in the hopes of finding a romantic match and, possibly, a mate. Season 18 follows 28-year-old Michelle Young, a former Division I basketball player from Minnesota who is now a fifth-grade teacher. She previously appeared as a runner-up in the 25th season of The Bachelor featuring Matt James. Production on this season takes place in Indian Wells, California and there will be 30 male contestants vying for Young’s heart. Bachelorette alums Tayshia Adams (season 16) and Kaitlyn Bristowe (season 11) share hosting duties.

The 18th season of The Bachelorette averaged a 0.65 rating in the 18-49 demographic and 2.89 million viewers. Compared to season 17, that’s down by 29% in the demo and down by 21% in viewership in the live+same day ratings (including DVR playback through 3:00 AM). While these numbers don’t include further delayed or streaming viewing, they are a very good indicator of how a show is performing, especially when compared to others on the same channel. There can be other economic factors involved in a show’s fate, but typically the higher-rated series are renewed and the lower-rated ones are cancelled. Find out how The Bachelorette stacks up against other ABC TV shows.

Will ABC cancel or renew The Bachelorette for season 19? This show did so well in the 2020-21 season that the network aired two cycles. Love them or hate them, all of the series in The Bachelor franchise perform well for ABC so I have no doubt that The Bachelorette will be renewed. I’ll update this page with breaking developments. Subscribe for free alerts on The Bachelorette cancellation or renewal news.

What do you think? Are you glad that The Bachelorette TV show has been renewed for a 19th season? How would you feel if ABC had cancelled this TV series, instead?