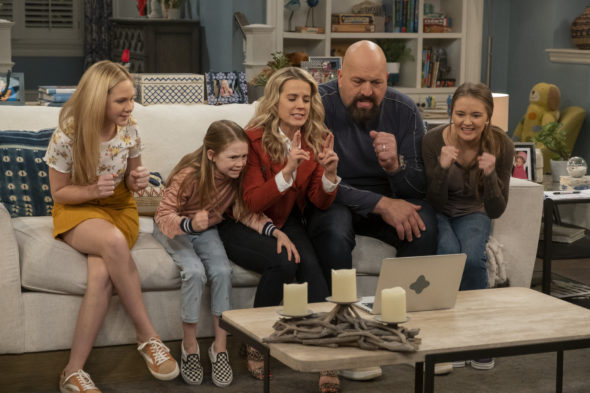 It looks like The Big Show’s show is over. Netflix has cancelled The Big Show Show TV series so there won’t be a second season.

A family sitcom, The Big Show Show stars WWE Superstar “The Big Show” aka Paul Wight, Allison Munn, Reylynn Caster, Juliet Donenfeld, and Lily Brooks O’Briant. When the teenage daughter (Caster) of The Big Show, a retired and world-famous WWE Superstar, comes to live with him, his second wife (Munn) and their two daughters (O’Briant and Donenfeld), he quickly realizes he’s been outnumbered and outsmarted. Despite being 7 feet tall and weighing 400 pounds, he is no longer the center of attention.

Deadline reports that the series has been cancelled but viewers haven’t seen all of the episodes just yet. The first eight episodes of this family sitcom were released by the streaming service on April 6th.

Though there won’t be a second season of The Big Show Show, a Christmas episode has already been filmed and will be released later this year. It’s a standalone episode so fans of the sitcom won’t be getting a true series finale.

What do you think? Have you seen The Big Show Show on Netflix? Would you have watched season two? Will you check out the Christmas episode?

Bring it back NOW

Just finished watching the season. Our family really enjoyed the story and fun characters. Great pop culture references and cameos. Shocked to see that it was not picked up for a second season being that it is much better than most of the big four network sitcoms.

I hope they reconsider.

I watched a couple of episodes. I couldn’t get through it, which is rare for me.

It was a pretty good show, but it doesn’t surprise me that Netflix canceled it. They cancel about 97% of their shows. There no reason to invest your time in any of their series.

I really liked this show. Reminded me of the 90’s sitcom shows I miss. Sad to see it go before they could wrap it up.