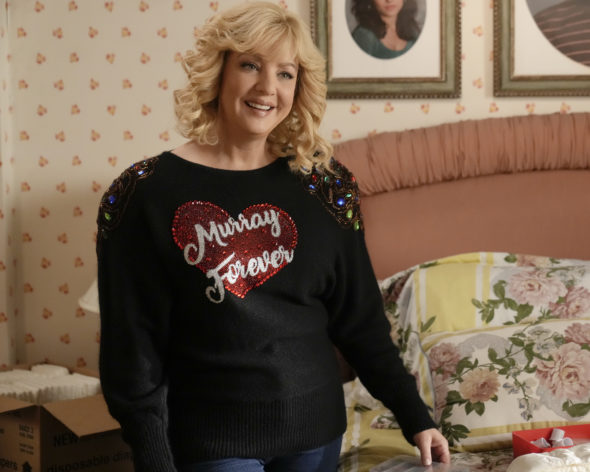 More changes are on the way. Has The Goldbergs TV show been cancelled or renewed for an 11th season on ABC? The television vulture is watching all the latest cancellation and renewal news, so this page is the place to track the status of The Goldbergs, season 11. Bookmark it, or subscribe for the latest updates. Remember, the television vulture is watching your shows. Are you?

Airing on the ABC television network, The Goldbergs TV show stars Wendi McLendon-Covey, Sean Giambrone, Troy Gentile, Hayley Orrantia, Sam Lerner, and Patton Oswalt (voice). Set in Jenkintown, Pennsylvania, and loosely based on the experiences of series creator Adam F. Goldberg, this comedy looks at life as seen by a young man growing up in the Goldberg family in the 1980s. Youngest child Adam (Giambrone) is obsessed with movies and spends his time documenting his colorful family’s ups and downs. Mother Beverly (McLendon-Covey) loves to take care of her family and meddle in their lives. Eldest child Erica (Orrantia) dreams of being a pop star if she can only overcome her secret love of all things uncool. Meanwhile, middle child Barry (Gentile) can be emotionally clueless. His best friend, Geoff “Madman” Schwartz (Lerner), is now married to Erica. The 10th season picks up after the death of patriarch Murray (Jeff Garlin), and everyone is back living under the same roof. Erica and Geoff are becoming parents, Adam and Barry are forced to share a bedroom, and Beverly prepares to be a Grandsmother.

The 10th season of The Goldbergs averages a 0.40 rating in the 18-49 demographic and 2.34 million viewers. Compared to season nine, that’s down by 26% in the demo and down by 26% in viewership in the live+same day ratings (includes DVR playback through 3:00 AM). While these numbers don’t include further delayed or streaming viewing, they are a very good indicator of how a show is performing, especially when compared to others on the same channel. There can be other economic factors involved in a show’s fate, but typically the higher-rated series are renewed and the lower-rated ones are cancelled. Find out how The Goldbergs stacks up against other ABC TV shows.

Will ABC cancel or renew The Goldbergs for season 11? A show that revolves around the decade of the ’80s has now been on the air for a decade. The series has seen some big changes in the past couple of years and my sense is that this will be The Goldbergs’ final year. However, if there’s money to be made and the cast agrees to continue, an 11th season isn’t out of the realm of possibilities. I’ll update this page with breaking developments. Subscribe for free alerts on The Goldbergs cancellation or renewal news.

What do you think? Do you hope that The Goldbergs TV show will be renewed for an 11th season? How would you feel if ABC cancelled this TV series, instead?