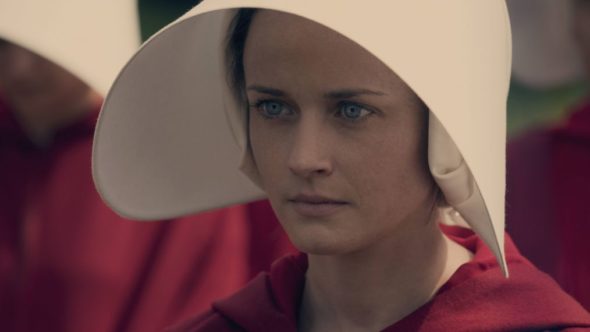 The Handmaid’s Tale is returning to Hulu for its fifth season but an original member of the cast won’t be back. Alexis Bledel is departing the dystopian drama series which is based on the novel by Margaret Atwood. Elisabeth Moss, Joseph Fiennes, Yvonne Strahovski, Samira Wiley, Ann Dowd, Max Minghella, Madeline Brewer, O-T Fagbenle, Amanda Brugel, Bradley Whitford, and Sam Jaeger star in the series which revolves around a totalitarian America that subjects fertile women (aka “Handmaids”) to child-bearing slavery.

Bledel said the following about her decision to leave the Hulu series, per Variety:

“After much thought, I felt I had to step away from ‘The Handmaid’s Tale’ at this time. I am forever grateful to Bruce Miller for writing such truthful and resonant scenes for Emily, and to Hulu, MGM, the cast and crew for their support.”

The actress received four Emmy nominations and took home one award for her role in the series.

A premiere date for The Handmaid’s Tale season five will be announced by Hulu later. Season four was released in Spring 2021.

What do you think? Are you sad to hear that Bledel is leaving The Handmaid’s Tale TV series?

Alexis will be missed. Emily was a strong character in spite of her being perceived as weak. But this final season needs to focus on ridding the States of this awful & backward state of being. Will June become President? But Fred’s murder was most satisfying. And who will raise Serena’s baby? And conflicted Aunt Lydia will end up how? Please wrap it up well.

With them all sitting in Canada, not a whole lot for any of them to do. The second half of Season 4 was 90% close-up shots of Liz Moss glowering into the camera.