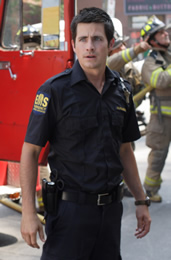 After low ratings, the peacock network has pulled the plug on the series about a telepathic paramedic.

The Listener debuted on June 4th on NBC. Initially produced for Canadian networks, the drama revolves around a young paramedic (Craig Olejnik) who has the ability to hear other people’s thoughts. Through his job and abilities, he seeks to help those in need in any way he can.

On NBC, the show got off to a rocky start in the ratings. The two-hour premiere brought in 5.32 million viewers and just a 1.4/4 rating/share of the 18-49 demographic. Summer viewing expectations aren’t very high but it didn’t bode well that the program landed in third place in total viewers and the demo.

Things didn’t get any better for the later episodes. Last week, Listener’s numbers hit a series low with 3.3 million viewers and a tiny 0.7/2 rating in the demo. Even for Summer viewership, those numbers are quite poor for a major network.

As a result, NBC has decided to end The Listener’s run prematurely. Next week’s episode will be the last to air on the peacock network and repeats of Law & Order will fill the timeslot after that.

The remaining five episodes of Listener are expected to be streamed online in August. The 13 episodes have already aired in many countries across the world and will continue to run in Canada.

Word is that the first season ends with plenty of unresolved mysteries. There’s been no news about the possibility of a second season for The Listener as yet but, if there is, you certainly won’t be seeing it on NBC.

What do you think? A good call by NBC or were you looking forward to seeing more?

I loved the Listener! I LOVED HEROES !! NBC TAKES OFF THE GOOD SHOWS AND PUTS BORING ONES!!!!!!!!!! THEY CANCELED HEROES EVEN THO IT HAD 5 MILLION PPL!!!!! SAVING HOPE HAS 1 MILLION AND ITS STILL ON NBC?!?!?!!? I DON’T GET NETWORKS WHY DON’T THEY LISTEN TO THE VIEWERS?!?!?!!? CBS BROUGHT BACK JERICHO TO BRING IT CLOSURE?!?! THAN IT GOT CANCELED AGAIN. BUT HEROES WAS DIFFERENT. HEROES WAS A WORLDWIDE PHENOMEM, THE LISTENER WAS LIKE HEROES. IT SHOWED DAILY PEOPLES LIVES. I MISS THE LISTENER AND MOST IMPORTANT OF ALL: HEROES!!!! BRING THEM BACK, IDC ON WAT NETWORK: FX, TNT,… Read more »

This show is amazing and what NBC and all the others don’t seem to understand is that not all people are home to watch it for the ratings. They need to make there shows all available online so people can watch them when they can and count the ratings online as well.

[…] a young paramedic (Craig Olejnik) who has the ability to listen to people’s thoughts, just didn’t catch on in the United States and did poorly in the […]

I absolutely love the new NBC TV series “Harry’s Law? The writing is excellent. what’s more, the choices of actors was very well thought out. Those who cast Kathy Bates could not have made a better choice. The surrounding cast is very complimentary to the Harriet character, each with well developed character personalities. The topic of discussion are pertinent to today and bring up lucid ideas on solutions which are humanitarian in approach. Thanks. I have my doctoral in Interdisciplinary Humanities and I am totally thrilled to be able to view current problems being addressed on a show which focuses… Read more »

I was really into this show when it aired. Was one of the few shows I’d make time to watch. I thought the story as well as the characters were great. NBC has some great shows, but they get rid of some of my favorites…

just like every other good show..networks are stupid..i love it

I LOVE THAT SHOW! THERE SHOULD DEFINITELY BE A SECOND SEASON!!!!!

Bring the show back! They should definitely have several more seasons. They didn’t give it a chance to get a big enough following – with another season it would have done well!!!

Please bring this show back!! I have been waiting for new episodes to air again and find out that its not?? Was not even given a chance!! But yet all these stupid reality shows still air!! Now that Ghost Whisperer is gone this would make a really good comeback!!

I looked forward to watching it when it was on tv, but work has been harsh and I have only been able to watch it online. I want it to keep going! It is a great show!

… have to at least give the series some closure. Something like this almost happend to the Roswell series on what used to be back then the WB 11 here in New York; they almost left it undone. Have to at least put something out to give it closure some cheap web episode or just even putting out a book would do the trick but please…. this needs to get closure. It just is not right to end something in that way.

Just finished watching all of season one off of youtube…. I WANT MORE!!! Bring it back plz!