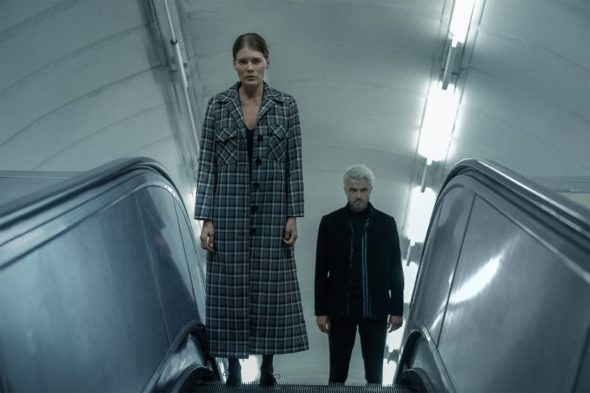 Will Myfanwy Thomas learn the truth? Has The Rook TV show been cancelled or renewed for a second season on Starz? The television vulture is watching all the latest cancellation and renewal news, so this page is the place to track the status of The Rook, season two. Bookmark it, or subscribe for the latest updates. Remember, the television vulture is watching your shows. Are you?

The first season of The Rook averaged a 0.04 rating in the 18-49 demographic and 225,000 viewers. Learn how The Rook stacks up against other Starz TV shows.

will Starz cancel or renew The Rook for season two? The ratings are quite low but I think this show might still be renewed. I’ll update this page with breaking developments. Subscribe for free The Rook cancellation or renewal alerts.

What do you think? Were you hoping The Rook TV show would be renewed for a second season? Are you said that Starz cancelled this TV series, instead?

Please, please give us another season. I want Gestalt and Mywfany together…

Please make a season 2 and 3!! Don’t leave is hanging like this.

I hope they bring it back for a 2nd season.

This show is like X-Men – but for adults. Well written, well acted, well produced.

This show is just OK if you treat it as a stand alone TV series, but since it isn’t. This show does not do the novel justice at all. There was so much changes that it is almost an entirely different story. The novel was much better then this TV series.

‘The Rook’ is one of the most interesting TV series online. I have very much enjoyed each episode of this series, without knowing there was only one season. I am eagerly waiting for the next season. Hope it comes out soon.

Very Sy-Fyish, but also, a very good show. Definitely in need of an ending… Please, there are a lot of us who have invested serious n precious time, do not let us hanging.
These are very enjoyable characters. Keep up the good work, thnx.

Love this show!! Hope to see The Rook back for Season 2.

I thoroughly enjoyed The Rook. Every episode was entertaining. Good cast of actors. The last scene in episode 8 leads to a lot of questions. Please renew for season 2. I want to know if the sisters reunite and how Myf lives more calmly amongst he civilian population.

I keep wondering when Myf is going to use her power to protect herself. Have enjoyed the series, and hoping the show returns!

I loved it! Please renew it or I’ll be crushed. Easy to be addicted to its characters.

Good show apart from the terrible gaff of pronouncing Myfanwy as “Myffany” instead of the correct “Miv-an-wy”. Given she and her sister, Bronwen, are Welsh, for a show shot in the UK the accents were terribly English 🙁