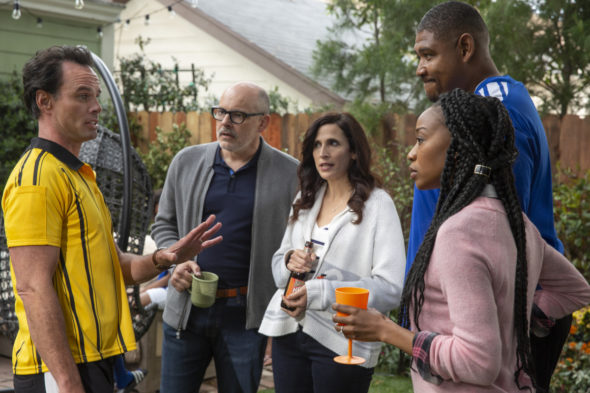 Will Wade find a new mate in the first season of The Unicorn TV show on CBS? As we all know, the Nielsen ratings typically play a big role in determining whether a TV show like The Unicorn is cancelled or renewed for season two. Unfortunately, most of us do not live in Nielsen households. Because many viewers feel frustration when their viewing habits and opinions aren’t considered, we invite you to rate all of the first season episodes of The Unicorn here. *Status Update Below.

A CBS single-camera comedy series, The Unicorn stars Walton Goggins, Rob Corddry, Michaela Watkins, Omar Miller, Maya Lynne Robinson, Ruby Jay, Makenzie Moss, and Devin Bright. A year ago, Wade (Goggins) lost his wife and he is now the single parent to their adolescent daughters, Grace (Jay) and Natalie (Moss). With the encouragement of his kids and close friends like Forrest (Corddry), Delia (Watkins), Ben (Miller), and Michelle (Robinson), Wade decides to try dating again. To his amazement, Wade is told that he’s considered a hot commodity in the dating world and the perfect single guy, aka a “unicorn”. He’s employed, attractive, and has a proven track record of commitment. Thanks to the support of his little girls and his friends, Wade is hoping to find happiness again and puts himself and his healing heart out into the world.

What do you think? Which season one episodes of The Unicorn TV series do you rate as wonderful, terrible, or somewhere between? Do you think that The Unicorn on CBS should be cancelled or renewed for a second season? Don’t forget to vote, and share your thoughts, below.

Never miss an episode! Renew it.

Renew!! We love this show!

I love this show and it just keeps getting better and better. For once a sitcom sharing real things. Please renew. You will be renewing my faith in sitcoms and good judgement. Walton Goggins is awesome and tops an awesome cast. And where did they find writers like these?Yes to season 2!

I love this show! The supporting cast….hilarious!
Give it time to get even better!

Walton Goggins is incredible. I have watched him for years. Please renew. It’s the only situation comedy I watch. Thank you..

Please don’t cancel, I can relate because I’m a widow. Better than watching dancing with the stars, etc.. A family show like the old days

Don’t cancel. I’m a widow and can relate

If i wanted to watch a drama it would not be in the form of a 30 minute wannabe sitcom. Please cancel this waste of time.

Hope his show isn’t cancelled. A group of us got together on holidays and watched. All of us really enjoyed. Looking forward to more. Thought I’d seen a notice January 6th?

Unicorn should be renewed.

oh then you’l really love this! he’s not even divorced he’s a widower! how’s that for funny? ha ha nope!

He wasn’t divorced he was widowed. At least get it right before you ditch it!

was kind of boring, ill give it a second chance,but for me, not very interesting at all

I thought it was pretty cute. Not as many laughs as I expected but I’ll watch again.