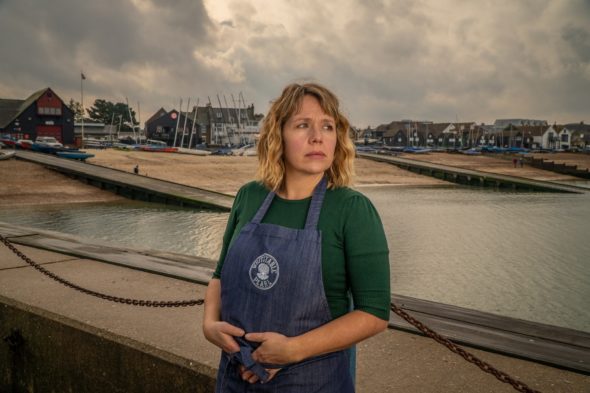 Whitstable Pearl is returning soon to Acorn TV. The streaming service has announced a premiere date for season two of the mystery series. Kerry Godliman, Frances Barber, Rohan Nedd, Robert Webb, and Emily Head star in the series, which follows Pearl Nolan (Godliman, above), a restaurant owner who has a knack for investigations. There will be six episodes once again.

Acorn TV revealed more about the return of the series in a press release.

The Acorn TV Original cozy seaside mystery series, Whitstable Pearl, returns ashore for its second season premiering Monday, November 28 with two episodes on Acorn TV, AMC Networks’ acclaimed streamer devoted to British and international television. Two new episodes will premiere weekly every Monday through December 12. Starring Kerry Godliman (After Life, Derek) as the titular Pearl Nolan, a restaurateur with a knack for investigation, Season Two will find Pearl in the middle of some big changes and even bigger cases including a potential kidnapping, a voyeuristic investigation of a man across the street, and the attempted murder of a ’70s starlet.

In Season One, Pearl (Godliman) juggled her commitments to the restaurant – the eponymous – Whitstable Pearl – with her ‘side hustle’ as a PI. Season Two, however, finds Pearl prioritizing her detective work – transitioning from being a chef who solves crimes to a full-time investigator who just happens to own a restaurant. It’s also been six months since the breakdown of her fleeting romance with DCI Mike McGuire (Howard Charles, Shadow and Bone, The Musketeers); the two former lovers have decided to remain friends, and both have moved on… fast. With every new case she takes, it always seems to begrudgingly overlap with Mike’s police investigations. Charged by a determination to outdo each other (and a fiery mutual attraction), it’s a race to solve each case, but when they work together, they make a hell of a team.

Check out a preview for Whitstable Pearl season two below.

What do you think? Are you a fan of this mystery series? Do you plan to watch the second season of Whitstable Pearl on Acorn TV?