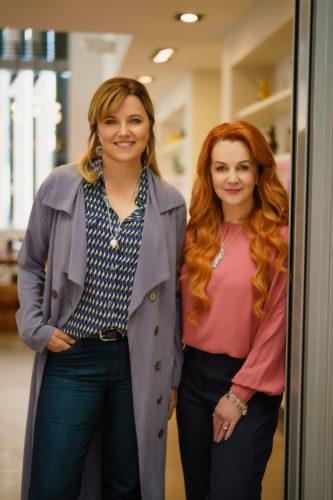 Xena: Warrior Princess fans can rejoice! Lucy Lawless and Renee O’Connor are reuniting on the small screen again soon. O’Connor is set to guest on an episode of Lawless’ My Life is Murder, which airs on Acorn TV.

The streaming service has released a photo featuring the reunited pair and shared more details about the upcoming season of the series.

“Acorn TV’s My Life is Murder is reuniting Lucy Lawless with her former castmate from the iconic Xena: Warrior Princess series, Renee O’Connor, in season two, which premieres on AMC Networks’ acclaimed streaming service Acorn TV on Monday, August 30. In an upcoming episode of the hit New Zealand mystery series, Alexa (Lawless) investigates the death of a self-help guru and finds herself in a cat-and-mouse game with the victim’s mysterious wife (O’Connor).

Alexa finds herself back in her home country of New Zealand for the first time in years and can’t help herself when she is asked to look into a bizarre unsolved murder. Joined again by her partner-in-crime-solving, Madison Feliciano (Ebony Vagulans), as well as series newcomers including the charismatic detective Harry (Rawiri Jobe) and café owner Reuben (Joe Naufahu), she quickly finds herself investigating other murder mysteries in surprising, glamorous worlds filled with intriguing characters who are hiding dangerous and deadly secrets.

What do you think? Were you a fan of Xena: Warrior Princess when it aired? Do you plan to watch Lawless and O’Connor reunite on My Life is Murder?

I love My Life is Murder! I hope there is a season 3!

Never watched Xena. But I am hooked on My Life is Murder. I truly hope there are 11 episodes this season, and mire seasons to come.

Can’t wait to see it.

I am an avid Xena fan and would love to see Lucy and Renee reunited. Not sure how to get Acorn TV.

Google acorn tv sand there is a site to sign up.

I will absolutely watch. “My Life Is Murder” is an intelligently written show with two very quirky and interesting actresses as the leads. I enjoyed the first season, and I’m looking forward to season 2. It will also be a joy to see Xena and Gabrielle reunited (as long as Lucy Lawless doesn’t get killed at the end. Good grief! That was horrible!).

Would love to watch the new series but do not subscribe to Acorn TV. I pay enough as it is to watch TV without adding more expense. Put it back on Alibi