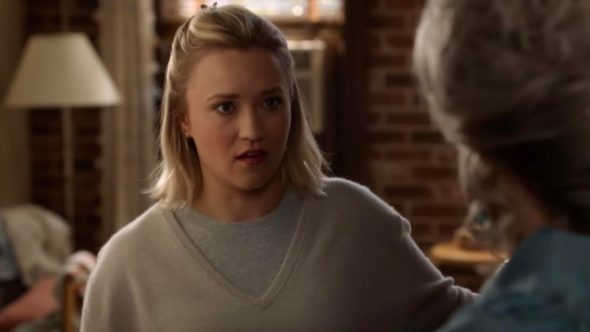 Young Sheldon has added two new faces to its cast for the current sixth season. Will Sasso and Rachel Bay Jones are joining the CBS comedy in recurring roles as the parents of Georgie’s pregnant girlfriend, Mandy (Emily Osment, above).

Deadline revealed more about the roles the pair will play in the CBS comedy:

Jones will play Audrey McCallister, Mandy’s domineering mother. She seems sweet, but is actually a force to be reckoned with both in her daughter’s life and in her marriage. She is unhappy with Mandy’s life choices (especially the one to have a baby with Georgie) and isn’t afraid to say so.

Sasso is playing Jim McCallister, Mandy’s good-natured father who owns the local tire store. The news that Mandy is having Georgie’s baby has put Jim in the crossfire between his pregnant daughter and stubborn wife.

Young Sheldon currently airs on Thursday nights on CBS, and the series has already been renewed for a seventh season.

What do you think? Are you excited to see Sasso and Jones on Young Sheldon later this season?