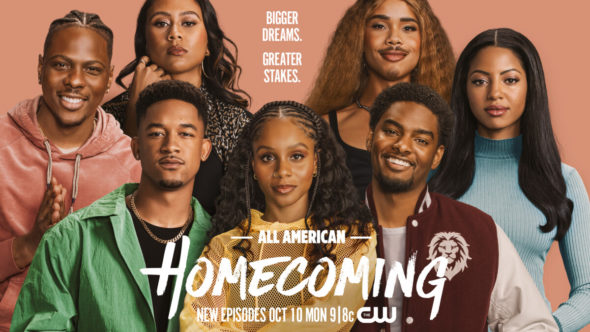 A sports drama series, the All American: Homecoming TV show is a spin-off of the All American series. It stars Geffri Maya, Peyton Alex Smith, Kelly Jenrette, Cory Hardrict, Sylvester Powell, Camille Hyde, Mitchell Edwards, Netta Walker, and Rhoyle Ivy King. Set against the backdrop of the highly competitive HBCU (Historically Black Colleges and Universities) experience at Bringston University, the story revolves around a group of talented athletes and students. This semester, Simone (Maya) finally has a spot in the top six on the tennis team, but proving she belongs there causes her to seek out a new kind of sisterhood. Damon found his birth parents, but the truth about why he was given up leads him to make a rash decision that threatens the baseball team and opens the door for a new adversary. Amara (Jenrette) has found a new role in serving as president of Bringston. Marcus (Hardrict) is determined to make things right with his team, and himself. JR (Powell) tries to repair his relationship with his dad. Thea (Hyde) struggles to find her way back to the court after her injury. Keisha (Walker) finds her footing in the dance program, and her relationship with Cam (Edwards), who has to find a way to pay for school after losing his scholarship. Nate (King) revisits old patterns but her outcomes may prove different, with the help of her friends. The pressure is on for these students to take Black excellence to new heights all while still navigating the highs, lows, and sexiness of unsupervised early adulthood.

For comparisons: Season one of All American: Homecoming on The CW averaged a 0.11 rating in the 18-49 demographic and 390,000 viewers in the live+same day ratings.

What do you think? Do you like the All American: Homecoming TV series on The CW? Should it be cancelled or renewed for a third season?

Canceling lots of shows. So why not this. CW network Should and better cancel the shelf along with all American these shows are a waste of time and money. This is expensive so the produce and so is the other one that is related to this. Cancel and get rid of them get something better and cheaper.

Save this great show