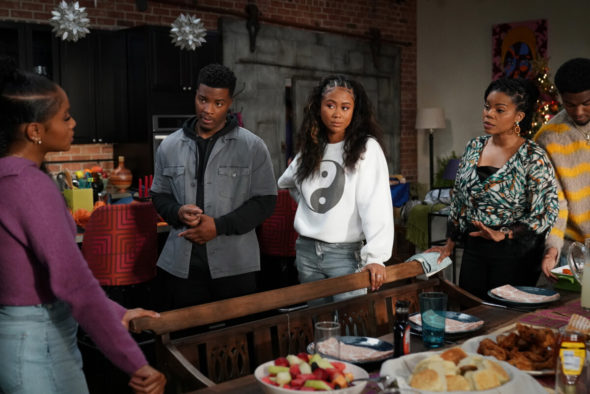 There are a lot of temptations when you’re living away from home. Has the All American: Homecoming TV show been cancelled or renewed for a third season on The CW? The television vulture is watching all the latest cancellation and renewal news, so this page is the place to track the status of All American: Homecoming, season three. Bookmark it, or subscribe for the latest updates. Remember, the television vulture is watching your shows. Are you?

A sports drama series airing on The CW television network, the All American: Homecoming TV show is a spin-off of the All American series. It stars Geffri Maya, Peyton Alex Smith, Kelly Jenrette, Cory Hardrict, Sylvester Powell, Camille Hyde, Mitchell Edwards, Netta Walker, and Rhoyle Ivy King. Set against the backdrop of the highly competitive HBCU (Historically Black Colleges and Universities) experience at Bringston University, the story revolves around a group of talented athletes and students. This semester, Simone (Maya) finally has a spot in the top six on the tennis team, but proving she belongs there causes her to seek out a new kind of sisterhood. Damon found his birth parents, but the truth about why he was given up leads him to make a rash decision that threatens the baseball team and opens the door for a new adversary. Amara (Jenrette) has found a new role in serving as president of Bringston. Marcus (Hardrict) is determined to make things right with his team, and himself. JR (Powell) tries to repair his relationship with his dad. Thea (Hyde) struggles to find her way back to the court after her injury. Keisha (Walker) finds her footing in the dance program, and her relationship with Cam (Edwards), who has to find a way to pay for school after losing his scholarship. Nate (King) revisits old patterns but her outcomes may prove different, with the help of her friends. The pressure is on for these students to take Black excellence to new heights all while still navigating the highs, lows, and sexiness of unsupervised early adulthood.

The second season of All American: Homecoming averages a 0.10 rating in the 18-49 demographic and 346,000 viewers in the live+same day ratings (includes all DVR playback through 3:00 AM). Compared to season one, that’s down by 5% in the demo and down by 11% in viewership. While these numbers don’t include further delayed or streaming viewing, they are a very good indicator of how a show is performing, especially when compared to others on the same channel. Though other economic factors are involved, the higher-rated shows usually get renewed and the lower-rated ones get cancelled. Find out how All American: Homecoming stacks up against other The CW TV shows.

Will The CW cancel or renew All American: Homecoming for season three? The network was previously utilized to air Paramount and Warner Bros. series and didn’t focus on being profitable because the parent companies made money selling the shows internationally and via streaming. Now that The CW is run by Nexstar, the network is shifting toward using acquired and inexpensive original programming to fill the schedule. The goal is to focus on programming that attracts a broad audience and for The CW to be profitable by 2025. The CW cancelled a lot of shows last year but renewed All American: Homecoming, which is produced by Warner Bros. Television (Warner Bros. Discovery owns 12.5% of the network). The show’s done pretty well in the ratings, and Nexstar CEO Perry Sook and newly installed CW president Dennis Miller are reportedly fans. I suspect that it will be renewed for a third season, but if not, I could see HBO Max taking it over. I’ll update this page with breaking developments. Subscribe for free alerts on All American: Homecoming cancellation or renewal news.

What do you think? Do you hope that the All American: Homecoming TV show will be renewed for a third season? How would you feel if The CW cancelled this TV series, instead?