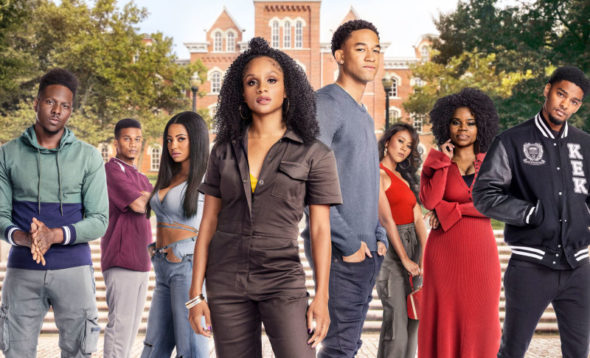 Set against the backdrop of the highly competitive HBCU (Historically Black Colleges and Universities) experience at Bringston University, the story revolves around two young talented athletes and students.

Simone Hicks (Maya) is a young tennis hopeful from Beverly Hills who is trying to fight her way back to greatness after some time away from the court. Meanwhile, Damon Sims (Smith) is an elite baseball player from Chicago who is carrying the weight of the world on his shoulders.

After Simone’s aunt Amara Patterson (Jenrette), a journalism teacher and activist, exposes a scandal that threatens to derail the school’s beloved baseball program, new coach Marcus Turner (Hardrict) is determined to bring a championship back to Bringston the honest way — with Damon’s help. Damon adjusts to his new normal with fellow baseball player and childhood friend JR (Powell) by his side.

As Simone struggles to find her footing, she gets a little guidance from Thea (Hyde), the super-competitive queen bee of the Bringston tennis team, and Keisha (Walker), the school’s unofficial mayor, who will help Simone learn how to live her best life.

As they contend with the high stakes of college sports, Simone and Damon also navigate the highs, lows, and sexiness of unsupervised early adulthood at a prestigious HBCU.

What do you think? Do you like the All American: Homecoming TV show? Do you think it should be cancelled or renewed for another season?