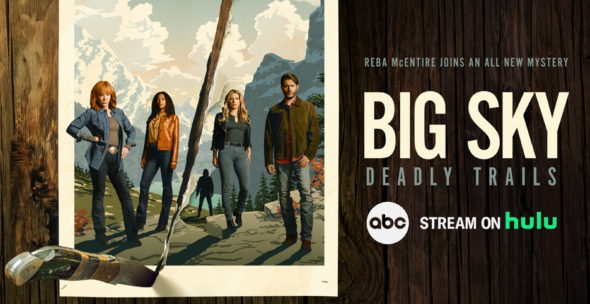 In the past, Big Sky hasn’t been a stellar performer in the traditional ratings for ABC, but episodes often more than double their viewership once the live+7 day viewers are factored in. Will this season become a hit in the live ratings? Will Big Sky be cancelled or renewed for season four? Stay tuned.

For comparisons: Season two of Big Sky on ABC averaged a 0.30 rating in the 18-49 demographic and 2.59 million viewers.

What do you think? Do you like the Big Sky TV series on ABC? Should it be cancelled or renewed for a fourth season?

This show is great! I love the cast. I love the plot lines so far. I am deep into season 2 right now. I would call it a must watch if you are into the crime dramas. With the sea of TV shows and other media options, I sure hope they don’t cancel it because of ratings.

I loved the show, but will watch on Hulu in the future. Way too many commercials on network TV. Haven’t watched network TV in a long while. Only came to this show for Jensen and Reba. It’s very good so far.