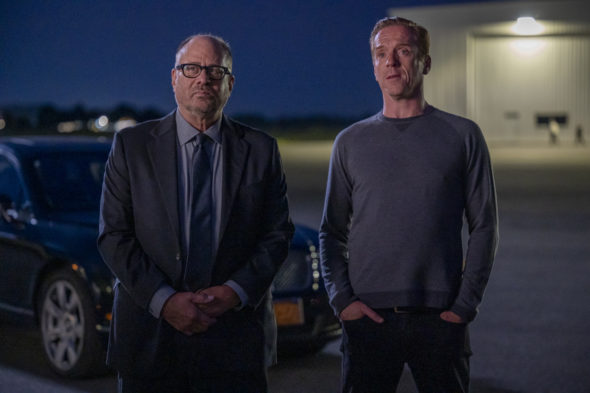 Billions ended its fifth season on Sunday night, and viewers won’t have long to wait for the return of the Showtime drama. Season six will arrive in January and a major change is ahead — Damien Lewis has departed the series after five seasons.

Thank you @SHO_Billions thank you @briankoppelman @DavidLevien. A pleasure and a privilege to play Axe for 5 seasons with some of the smartest, funniest most talented cast and crew I’ve worked with. I’ll miss the Billions family. Yep, some jobs are more than just a job…. Love.

Showtime revealed more about the upcoming sixth season in a press release.

“On the heels of the shocking season five finale of BILLIONS, SHOWTIME has announced that season six of the hit drama series, starring Oscar(R) nominee and Emmy(R) winner Paul Giamatti, Corey Stoll and Maggie Siff, will return on Sunday, January 23 at 9 p.m. ET/PT. Daniel Breaker (Girls5eva), who stars as Scooter, the brilliant and locked down Chief of Staff of Michael Prince (Stoll), has been upped to series regular. To watch and share the trailer, go to:

In season six of BILLIONS, the dust of season five clears to reveal a world that has evolved. With Axe (Damian Lewis) gone and Michael Prince assuming his place, Chuck (Giamatti) must develop a new strategy that is keener and more sophisticated than before. All the players, from Wags (David Costabile) to Wendy (Siff), from Taylor (Asia Kate Dillon) to Sacker (Condola Rashad), and of course Senior (Jeffrey DeMunn), must sharpen their weapons and look for new alliances in order to survive. The ground is ever shifting and the stakes absolute. New king, new war, new rules.

A trailer for the Billions season six was also released.

What do you think? Are you planning to watch the new season of Billions on Showtime?  Are you disappointed by Lewis’ departure?

Wont be the same without Lewis! Not sure if I will watch.

Without Damien won’t be the same . The new guy is ok but not enough presence . Won’t be waiting for it but might watch an episode

Not sure, may watch but don’t think it will be the same. I didn’t care for Prince’s character to begin with.

Really hoping it’s not the AG against Prince now. Same story, new Axe? No thanks. I’ll give it a go tho

Billions will not be the same without Axe… very disappointed to see him go!

Very disappointed to see Axe leave permanently
I was hoping Wendy would be able to visit him in Switzerland. Not sure about Prince and continuing Billions
Show should have ended with them flying into the Sunset

Yes, wish the kids were never a part of it so this could’ve happened. Them in Fiji.

Paul Giamoni is the best Axe. Billions such a great show look forward to seeing it every Sunday legal drama every year. Never missed any episode of it. Enjoy it and love it. Loyal fan.

man, Showtime is bad luck for Damian Lewis, 1st homeland killed him off then Billions made him flee

Personally I find Prince interesting. He may try to put on a front of a do-good “white hat” but I think there’s evil lurking underneath that will crush his foes as Axe did. My final wish for this show is that when it does come to an end, Taylor sees & regrets the direction she chose, and that some how, some way, Wendy and Axe wind up together far from the maddening crowd – oh yeah, I want Wags to find a sweet spot all his own too.

Billions without Axe is like Van Halen without David Lee Roth. They might get another season or two out of it, but it’s not going to be nearly as good.

Without Ax..forget about it…I am done

I don’t know if the show can continue on the same high note as when David Lewis was playing Axe. I will get it a chance but just don’t know. We will see.

The show is not going to be the same with out Damien Lewis as Axe. I doubt it will be any good and simply rehash old story lines with Stroll as Mike Prince. I think the next season will be the last one and they should have just made a clean break and ended it this season.

Look forward new season new year and better one too.