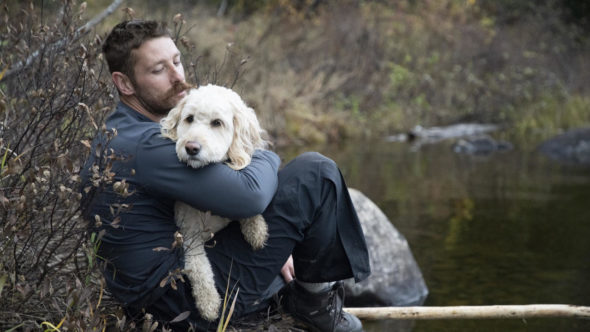 Called to the Wild has a premiere date on National Geographic. The competition series will follow pairs of humans and dogs as they work together in the outdoors. The pair that not only survives but thrives wins the competition.

National Geographic Channel revealed more about the new series in a press release.

“Human and dog teams test their indelible bond by embarking on a survival challenge in the remote Maine wilderness. These men and women must rely on their skills, instincts – and their dogs – to build shelter, scent food, ward off predators and battle the elements. The team that not only survives but thrives after 10 days will be declared the winner, as they are CALLED TO THE WILD.

As winter approaches, three teams of human and dog pairs will venture into the remote wilderness of Maine on a journey of a lifetime. They will work together to survive off the land for 10 blistering days. An Iditarod racing team, a rescue dog and his trainer, and a survivalist with her 8-month-old Lab take on the ultimate challenge when they are CALLED TO THE WILD.

Three survivalists embark on a journey with their canine companions into the Maine wilderness. A survival instructor, a cancer survivor and a seasoned fisherman will need to rely on their trusted dogs to find water, secure food and build shelter during a 10-day challenge. The human/dog packs will work together in order to prove they are CALLED TO THE WILD.

A search and rescue specialist, an outdoor survival instructor and a wilderness enthusiast, along with their aging dogs, encounter harrowing conditions in a brutal survival challenge. As Maine temperatures plummet and winter approaches, can these rugged survivalists work with their canine companions to endure 10 days in the wilderness?

Barking Up the Wrong Tree

A homesteader and her 12-year-old terrier, a primitive skills enthusiast and his German shepherd, and a mountaineer with his golden doodle head into the remote wilderness of Maine. For 10 days, the teams will rely on one another for shelter, fire and food. They will need to overcome extreme conditions, predators and even injuries to survive the challenge.

As winter settles upon Maine’s wilderness, three human and dog teams rely on one another’s strengths to make fire, find food, build shelter and face mental and physical battles. A decorated military veteran and his loyal service dog, a rock climber and her climbing pup, and an attorney and his hunting dog set out on a 10-day challenge to see if they have been CALLED TO THE WILD.

Under the relentless battering of northern Maine’s winter weather, a professional dog trainer and her eager border collie, an established veterinarian and his young labradoodle, and a civil engineer with his playful Labrador, set out on a grueling survival challenge. The teams will have to rely on each other as humans and dogs did thousands of years ago when they are each CALLED TO THE WILD.”

The series arrives on December 7th. Check out the trailer for Called to the Wild below.

What do you think? Are you excited to see Called to the Wild on National Geographic?

In Barking Up the Wrong Tree, when the mountaineer and his golden doodle were in the tree fishing, the mountaineer wanted to get below his dog to help him down because he said dogs can’t back up. What is that about? I have a rescued Redbone coonhound and an abandoned pure bred Boxer and they both can back up. Did I understand him wrong or miss something?

How do you apply to be on the show

Terrible show. Let’s show how weak humans are and how these poor dogs are taken advantage of. End it.

What kind of show looks for a winner but there is no prize?

It is so obvious that some of this show is staged. Not to mention the added touch of being overly dramatic.

Enjoyed the episodes I watched. Do the winners get any compensation?

Watched 2 hours
2 hours I will never get back,just another reality TV show.
It’s naked and afraid with clothing and dogs.
I love dogs,but this show stinks.

In the “called to the wild” show, I don’t think its fair that the dogs should have to starve because the humans want an adventure; they should bring dog-food along for the dogs.

Read the screen shot at start of show,dogs are fed by veterinarian.

What do the contestants win at the end?

This one is partially fake. When they guy caught a fish (Which was in a very small puddle, not a lake) they called it a landlocked Salmon. For those that fish or have fished, you know that this was a Brown Trout, not a salmon. The other reason you know it was probably from a fish hatchery is that the meat was not orange as is the case with most wild trout or salmon. Glad I caught it on the first episode so I can move on to other things. I do like most of the shows on NatGeo.

Dane and Willow were, by far, the most entertaining!

As the mother of women and grandmother of 7 girls, all outdoors people, I was appsllef that Jen was given so little tine as opposed to the men in Barking upthe wribg tree.
She was most comfortsble ib that environment and her 13 year old Bean should have gotten points for toughness.
No drama from her like the guys.
She just moved forward. Misogeny abounds at National Geographiv.
B.Kenney

That’s not how it works , pay attention

Cancel this show! Dogs aren’t being treated right. Why should they starve?!

Did you see the caption at the beginning of the show? The dogs are fed and monitored throughout the show while the humans have to defend for themselves.

Pay attention to the beginning of the show,they r monitored by vets