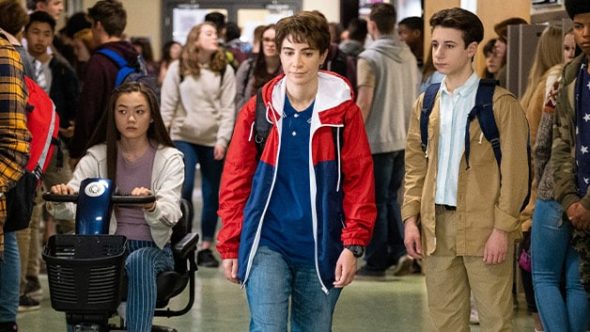 Chad, Love Life, and The Big D all have premiere dates set by TBS. A comedy series, Chad was originally set to return on April 11th, but it was delayed without explanation. Now, season two will arrive on July 11th. The second season of Love Life, a romantic comedy anthology series, will launch on July 31st and The Big D, a new relationship competitions series, will premiere on July 7th.

TBS revealed more about their summer programming in a press release.

Summer break is over and it’s sophomore year for newly elected class president, Chad Amani (Pedrad). In this hilarious second season, Chad deals with a scandal that quickly ends his presidency, has a surprising new love interest, and gets a visit from his tough-as-nails Iranian grandmother – all while continuing to worry about his popularity, and discovering new ways to relate to his Persian cultural roots. Chad’s epic path to teenage self-realization is not always a straight line–but the support from his family and best friend Peter (Jake Ryan) keep Chad on track, giving him the confidence to help him become who he has always wanted to be – the most American boy in the history of the world.

Returning cast for season two will include Jake Ryan as Peter; Paul Chahidi as Uncle Hamid; Saba Homayoon as Naz, Chad’s mother; Ella Mika as Chad’s sister, Niki; Alexa Loo as Denise; and Thomas Barbusca as Reid. Sara Malal Rowe has also been added to the lineup this season.

*TBS has moved the season two premiere of Chad to July 11th from the previously announced April 11 date.

Premiering Thursday, July 7 at 9:00pm ET/PT, The Big D is an explosive ten-episode dating competition series that takes on the relationship space with a twist, following recent divorcees as they search for romance in paradise with one catch – their exes will be along for the journey. Over the course of several weeks, 10 divorced couples move into a tropical villa in Costa Rica to re-learn how to date and search for love amongst a group of other single divorcees – including their ex. The group takes part in revealing relationship EX-ercises designed to help the singles form connections, make peace with their former partners, and finally get over the issues holding them back from dating. Each episode, one person who isn’t relationship material will be eliminated. Jealous exes may try to send their rival home or perhaps even defend their exes’ honor – the possibilities are endless. Hosts JoJo Fletcher and Jordan Rodgers (“The Bachelorette”) are no strangers to courting in-front-of a camera and will be on-hand to help the divorcees get back into the dating game.

The Big D is produced for TBS by Lighthearted Entertainment with Rob LaPlante, Jeff Spangler and Kevin Lee serving as executive producers.

The second season of Love Life will launch on Sunday, July 31 at 10:00pm ET/PT on Front Row on TBS.

Season two of the Max Original romantic comedy anthology series Love Life focuses on Marcus Watkins (Emmy(R) nominee and executive producer William Jackson Harper). After his marriage unexpectedly implodes, Marcus is forced to rebuild his life brick by brick, hoping to find a love that will last, once and for all.

Check out trailers Chad and The Big D below.

What do you think? Are you excited to see these shows on TBS this summer?