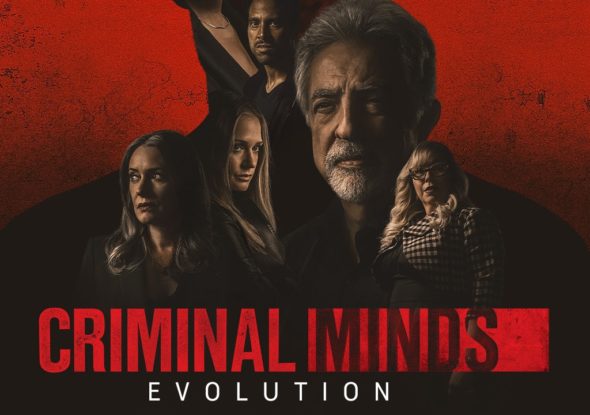 Criminal Minds: Evolution arrived on Thanksgiving Day and Paramount+ subscribers were treated to a few surprises in the revival. While the 10 episodes will tell a complete story, it is possible that viewers could see a second season as well.

A crime drama, the Criminal Minds: Evolution TV show is a sequel to the Criminal Minds series and stars Joe Mantegna, A.J. Cook, Kirsten Vangsness, Aisha Tyler, Adam Rodriguez and Paget Brewster with Zach Gilford, Josh Stewart, and Nicole Pacent recurring. In the story, the FBI’s elite team of criminal profilers come up against their greatest threat yet — an UnSub who has used the pandemic to build a network of other serial killers. As the world opens back up and the network goes operational, the team must hunt them down, one murder at a time. Returning characters include David Rossi (Mantegna), Jennifer “JJ” Jareau (Cook), Penelope Garcia (Vangsness), Tara Lewis (Tyler), Luke Alvez (Rodriguez), Emily Prentiss (Brewster), and Will LaMontagne Jr. (Stewart).

Showrunner Erica Messer spoke about the return of the Criminal Minds characters and the potential for future seasons in an interview with Deadline:

“I think it could go on for as long as this group wants to do it. We’re all energized, excited, and loving what we’re doing. I think as long as we want to keep doing it, I don’t see why we shouldn’t.”

Messer also touched on why two of the original show’s cast did not return for the revival. She said the following:

“[Matthew Gray Gubler has] been doing other projects and a lot of those were lining up during our window. Our window of shooting was just August to December 2. It was the same with Daniel Henney, who was working on The Wheel of Time. So I wasn’t able to get them, but I could get the six other cast members. They’ve never been better. They’re so happy. Their characters took the same time off that we had in real life, with the pandemic. The world has changed since we last saw the BAU. And because of that, the characters have changed. We needed to write to the reality of our everyone’s existence.”

It is possible that viewers could see the missing characters return in future seasons.

What do you think? Have you been watching this sequel series? Do you want to see more of Criminal Minds: Evolution on Paramount+?

I love the show I love this group of actors! I
Would love to see MGG return but I
Still love watching the Evolution!

Yeah they are back

Enjoyed the show. Miss the other actors. I do not like their language. It’s offensive to me. And most unnecessary.

It will be interesting to see if this gets a second season. The one episode that aired on CBS didnt pop a big audience, in fact it would be one of CBS worst rated scripted shows this season. Perhaps the numbers were better on P+. But the audience on CBS says everything about whether they should still bother to air it on there.

Just FYI… Everyone who wants to watch Criminal Minds: Evolution can watch it on Hulu as well as, Paramount+. I have both subscriptions & didn’t think it would be on Hulu but it’s on CBS too. So, just wanted to share that so everyone can hopefully enjoy Criminal Minds. I’ve always LOVED this show & so excited it’s back. I really hope they can get the whole team back together for next season. Hotch too!!! I can dream can’t I… LoL
Thank you for bringing back the best show on TV! We all missed it!!!

I’ve been a dedicated follower of the series even after I discovered how unlike reality it really is. When I was going for my Master’s Degree in National Security Studies with concentrations in Intelligence Analysis and Counterterrorism, my Counterterrorism professor was retired FBI and a former Director of the BAU. There’s no jet and they never leave the office. On the other hand, SOCOM (Special Operations Command) has a freaking FLEET of Gulfstream jets. This group… they all look really tired. Rossi (Mantegna) is 75 years old! He looks every day of that. I hope Emily isn’t really going grey.… Read more »

They should leave it on CBS not all people get paramount +. We watched it liked it now we can’t see it, not right!!.

I have cable & always watched Criminal Minds for all the years it was on! I will not pay for Paramount+, I have Paramount & I pay enough for what I do have so I will not spend any more money. Brind it back on cable TV & I will definitely watch Criminal Minds Evolution!

Yes, please keep the show going and if you can pls bring the other wonderful actors back also~ thank you very much!! You are the best!

I definitely want to see MUCH more, as I have always loved this show! My only unfortunate part is that I don’t have Paramount+ so I haven’t been able to watch it since it came back on. :*( But thank you for bringing it back for those who can see it! LOVE IT!!

Watched the first 2 episodes (UK based) and loved how they have gone back to basics for CM and the BAU Team.
Serial killer(s) too many bodies to mention, Penelope to the fore, can’t wait to watch the storyline develop over what will hopefully be the first of many CME series on Paramount.

I never get tired of this show. But I miss the other two characters terribly.