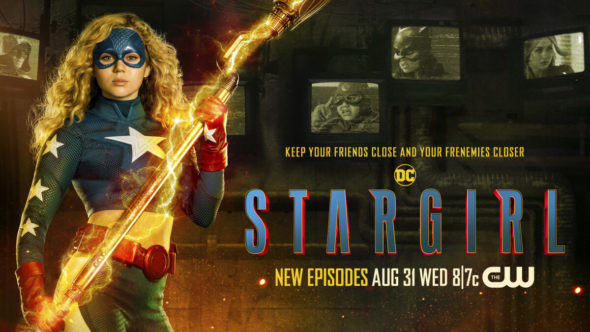 At one time, superhero shows like DC’s Stargirl were essentially guaranteed to be renewed year after year. That’s all changed now that Nexstar Media Group is purchasing a controlling interest in the network. Nexstar reportedly plans to focus on traditional network shows that have a more broad appeal, and that doesn’t sound like DC’s Stargirl. Will the show be cancelled or renewed for season four? Stay tuned.

A superhero drama series, DC’s Stargirl stars Brec Bassinger, Yvette Monreal, Anjelika Washington, Cameron Gellman, Trae Romano, Hunter Sansone, Meg DeLacy, Alkoya Brunson, Neil Hopkins, Joy Osmanski, Amy Smart, and Luke Wilson, with special appearaces by Joel McHale. The series follows high schooler Courtney Whitmore (Bassinger) whose life is turned upside down when her mother (Smart) remarries and moves the household from Los Angeles to the small community of Blue Valley in Nebraska. While trying to fit in, Courtney discovers that her new stepfather, Pat Dugan (Wilson), was once the sidekick to a long-lost hero named Starman (Joel McHale). She also finds Starman’s powerful cosmic staff and is able to wield it. Soon, Courtney inspires an unlikely group of young heroes to help stop a group of villains from the past and to uphold the legacy of the first superhero team, the Justice Society of America. In the third season, Starman (McHale) is back from the dead and offering to train Courtney while she helps him adjust to his new life in the quiet town of Blue Valley. When there’s a murder that needs to be solved, the mystery not only has our heroes questioning the former super-villains’ commitment to truly reforming, but it leads Courtney, Pat, and Starman to a secret that shocks them all to their very core.

What do you think? Do you like the DC’s Stargirl TV series on The CW? Should it be cancelled or renewed for a fourth season?

Everyone likes the show.