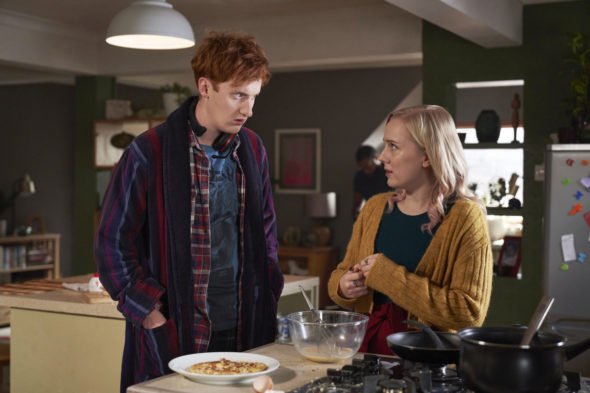 Will the game lose its attraction for these players in the second season of the Dead Pixels TV show on The CW? As we all know, the Nielsen ratings typically play a big role in determining whether a TV show like Dead Pixels is cancelled or renewed for season three. Unfortunately, most of us do not live in Nielsen households. Because many viewers feel frustration when their viewing habits and opinions aren’t considered, we invite you to rate all of the second season episodes of Dead Pixels here.

A comedy-fantasy series on The CW, Dead Pixels stars Alexa Davies, Will Merrick, Sargon Yelda, Charlotte Ritchie, David Mumeni, and Noush Skaugen. It revolves around a trio of friends and their passion for playing an MMORPG (Massively Multiplayer Online Role-Playing Game). The show follows gamers Megan “Meg” Jeffries (Davies), Nicholas “Nicky” Kettle (Merrick), and Usman (Yelda) who are obsessed with the online fantasy game “Kingdom Scrolls.” Meg would happily cut a date short to go home and defend Castle Blackfinger. Nicky thinks the miscasting of Vince Vaughn as Tanadaal in the “Kingdom Scrolls” movie is an international outrage. And Usman has made a plywood lid for his child’s playpen — so he can play the game in peace. As the show begins, Meg meets a new guy named Russell (Mumeni). The series is split equally between the real-world characters’ tragicomic lives and their computer-animated misadventures in the “Kingdom Scrolls” game. In season two, our gaming fanatics are thrilled by the arrival of the Kingdom Scrolls expansion pack. However, their excitement is quashed when they discover that the game they love so much has been commercialized and overrun by a younger generation of players.

What do you think? Which season two episodes of the Dead Pixels TV series do you rate as wonderful, terrible, or somewhere between? Do you think that Dead Pixels should be cancelled or renewed for a third season on The CW? Don’t forget to vote, and share your thoughts, below.