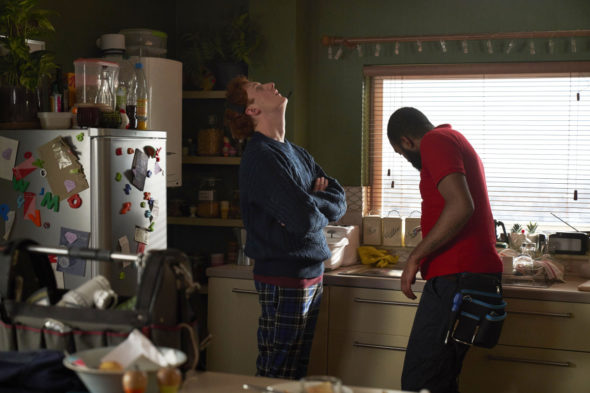 Will these players keep playing? Has the Dead Pixels TV show been cancelled or renewed for a third season on The CW? The television vulture is watching all the latest cancellation and renewal news, so this page is the place to track the status of Dead Pixels, season three. Bookmark it, or subscribe for the latest updates. Remember, the television vulture is watching your shows. Are you?

Airing on The CW television network in the United States, Dead Pixels stars Alexa Davies, Will Merrick, Sargon Yelda, Charlotte Ritchie, David Mumeni, and Noush Skaugen. It revolves around a trio of friends and their passion for playing an MMORPG (Massively Multiplayer Online Role-Playing Game). The show follows gamers Megan “Meg” Jeffries (Davies), Nicholas “Nicky” Kettle (Merrick), and Usman (Yelda) who are obsessed with the online fantasy game “Kingdom Scrolls.” Meg would happily cut a date short to go home and defend Castle Blackfinger. Nicky thinks the miscasting of Vince Vaughn as Tanadaal in the “Kingdom Scrolls” movie is an international outrage. And Usman has made a plywood lid for his child’s playpen — so he can play the game in peace. As the show begins, Meg meets a new guy named Russell (Mumeni). The series is split equally between the real-world characters’ tragicomic lives and their computer-animated misadventures in the “Kingdom Scrolls” game. In season two, our gaming fanatics are thrilled by the arrival of the Kingdom Scrolls expansion pack. However, their excitement is quashed when they discover that the game they love so much has been commercialized and overrun by a younger generation of players.

The second season of Dead Pixels averaged a 0.03 rating in the 18-49 demographic and 161,000 viewers in the live+same day ratings (includes all DVR playback through 3:00 AM). Compared to season one, that’s down by 67% in the demo and down by 57% in viewership in the live+same day ratings (including DVR playback through 3:00 AM). While these numbers don’t include further delayed or streaming viewing, they are a very good indicator of how a show is performing, especially when compared to others on the same channel. Though other economic factors are involved, the higher-rated shows usually get renewed and the lower-rated ones get cancelled. Find out how Dead Pixels stacks up against other CW TV shows.

Will The CW cancel or renew Dead Pixels for season three? The series originates on the E4 channel in the UK so it likely doesn’t cost The CW much to air. If it’s renewed for a third year overseas, I think The CW will air it. I’ll update this page with breaking developments. Subscribe for free alerts on Dead Pixels cancellation or renewal news.

What do you think? Do you hope that the Dead Pixels TV show will be renewed for a third season? How would you feel if E4 and The CW cancelled this TV series, instead?

I so hope it’s renewed! I laugh constantly while watching! You have to love/get dry humor. Oh and if you’re a gamer how can you not! I’m from the states and this makes me want to visit the UK ASAP!