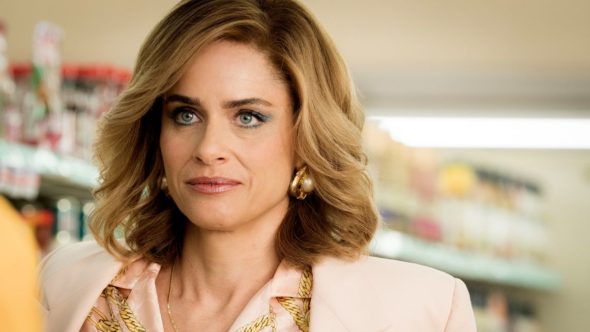 The Fatal Attraction revival series now has another leading lady. Amanda Peet (above) is joining the thriller series which is based on the 1987 film of the same name. She’ll play the loyal wife of Joshua Jackson’s character. Peet last appeared as Betty Broderick in the most recent season of Dirty John. Lizzy Caplan is playing the role of the mistress, Alex Forrest, who becomes obsessed with the couple after an affair.

Paramount+ revealed more about Peet’s casting in the upcoming series:

Peet will star as Beth Gallagher, a loyal wife, loving mother and successful small business owner whose world unravels when her husband Dan’s (Jackson) indiscretion threatens to destroy their life together.

A deep-dive reimagining of the classic psychosexual thriller and ’80s cultural touchstone, the new series will explore fatal attraction and the timeless themes of marriage and infidelity through the lens of modern attitudes toward strong women, personality disorders and coercive control.

Amanda Peet starred in season two of the anthology series “Dirty John: The Betty Broderick Story.”  Before that, she was in ”The Romanoffs,” “Brockmire,” and “Togetherness,” created by the Duplass Brothers, as well as “Studio 60 on the Sunset Strip.” She has appeared in the films “Please Give,” “Something’s Gotta Give,” “The Whole Nine Yards,” “Syriana” and “Igby Goes Down,” among others. Her play “The Commons of Pensacola,” which was produced by Manhattan Theatre Club, starred Blythe Danner and Sarah Jessica Parker. Her most recent play, “Our Very Own Carlin McCullough,” ran in 2018 at The Geffen Playhouse in Los Angeles.  Most recently, Peet created the series “The Chair” starring Sandra Oh.

A premiere date and more details for this Paramount+ series will be announced later.

What do you think? Do you plan to check out the new Fatal Attraction TV show when it debuts on Paramount+?