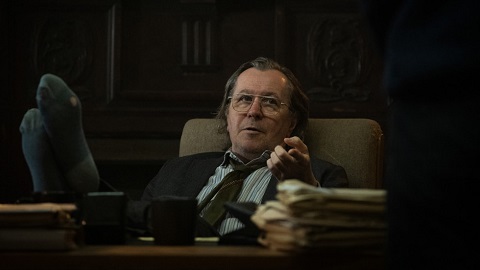 Slow Horses is not going anywhere anytime soon. Apple TV+ has renewed the spy drama for two more years — seasons three and four. The series was renewed initially through its second. Season one was released in April, and viewers will see season two later this year.

Starring Gary Oldman, Slow Horses is based on novels by Mick Herron and the story follows a man (Oldman) who leads a group of disgraced British intelligent agents.

In season three of “Slow Horses,” Jackson Lamb’s disgraced spies work together to foil a rogue agent when one of their own is kidnapped. Season four opens with a bombing that detonates personal secrets, rocking the already unstable foundations of Slough House.

The series is produced for Apple TV+ by See-Saw Films and adapted for television by Will Smith (“Veep”). Jamie Laurenson, Hakan Kousetta, Iain Canning, Emile Sherman, Douglas Urbanski, Gail Mutrux, Will Smith, Jane Robertson and Graham Yost serve as executive producers on the series. Saul Metzstein is set to direct the third season, the director for the fourth season has not yet been announced.

The six-episode first season of “Slow Horses” launched globally on Apple TV+ on Friday April 1, 2022, with the second season set to premiere globally later this year, directed by Jeremy Lovering.”

A premiere date for Slow Horses season two will be announced later.

What do you think? Are you a fan of this Apple TV+ spy drama? Do you plan to watch season two?