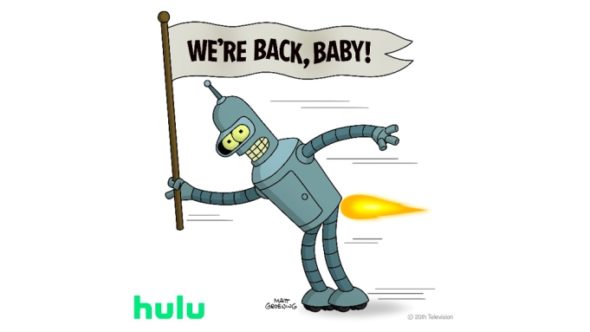 Fry, Leela, and Bender have been revived — again. Hulu has announced that the Futurama series will return for 20 new episodes. A table read will be held on Monday and new episodes will be released at some point in 2023. The show’s existing episodes can currently be found on the streaming service.

Cast members Billy West, Katey Sagal, Tress MacNeille, Maurice LaMarche, Lauren Tom, Phil LaMarr, and David Herman are all returning for the revival. John DiMaggio, who voiced Bender and others, is noticeably missing from the announced cast. Word is that 20th Television Animation hasn’t struck a deal with DiMaggio to return yet but both sides are still hoping an agreement can be reached.

Created by Matt Groening and David X. Cohen, the Futurama series debuted on FOX and aired from 1999 until 2003. The show was resurrected in 2007 as four direct-to-DVD movies that subsequently aired as 30-minute episodes on Comedy Central. Based on their success, Comedy Central ordered new seasons of the series which debuted in June 2010 and ran until September 2013. The series was cancelled once again.

Here’s the announcement from Hulu:

“I’m thrilled to have another chance to think about the future… or really anything other than the present,” said David X. Cohen.

“It’s a true honor to announce the triumphant return of Futurama one more time before we get canceled abruptly again,” commented Matt Groening.

“When presented with the opportunity to bring fans and viewers new episodes of Futurama, we couldn’t wait to dive in. This iconic series helped blaze the trail for the success of adult animation since its initial launch and we look forward to Matt & David continuing to pave the way and further establishing Hulu as the premiere destination for fans of the genre,” said Craig Erwich, President, Hulu Originals and ABC Entertainment.

“What I love about animation is that it’s possible for a successful show to take a pause and then resume years later, even on a different platform, and pick up right where it left off. Futurama is one of those shows. The excitement from Hulu about returning Matt and David’s genius creation for all-new episodes has been off the charts. I’m thrilled that this incredible team will get to tell more stories, and that our Planet Express crew will have more adventures together. It’s a win for the fans who have loved the show since the beginning, and for the ones who will now discover it for the very first time,” commented Marci Proietto, Head of 20th Television Animation.

First airing on FOX from 1999-2003, FUTURAMA was brought back in 2007 with four direct-to-DVD movies that subsequently aired as 30-minute episodes on COMEDY CENTRAL. Based on their success, COMEDY CENTRAL ordered new seasons of the series which made a triumphant return to television in June 2010. FUTURAMA is only the second series in the history of the medium to go back into production based on the strength of its DVD sales and repeat airings on cable. Over the course of its storied run, FUTURAMA earned six Emmy(R) Awards–including two Outstanding Animated Program, seven Annie Awards, two Environmental Media Awards and two Writer’s Guild of America Awards. Over its seven seasons spanning two decades, 140 original episodes were produced, with the then-final episode airing on September 4, 2013.

FUTURAMA focuses on the life of Philip Fry (Billy West), a 25-year-old pizza delivery boy who accidentally freezes himself on December 31, 1999 and wakes up 1,000 years later with a fresh start at life and a “diverse” new group of friends including Leela (Katey Sagal), a tough but lovely one-eyed alien and Bender, a robot who possesses human characteristics and flaws.

About Hulu:
Hulu is the leading premium streaming service offering live and on-demand TV and movies, with and without commercials, both in and outside the home. As part of Disney’s Media and Entertainment Distribution segment, Hulu is the only service that gives viewers access to current shows from every major U.S. broadcast network; libraries of hit TV series and films; and acclaimed Hulu Originals including Emmy(R) and Golden Globe Award-winning series The Handmaid’s Tale and The Act; Golden Globe Award-winning, Emmy(R) Award nominated and Peabody-winning series Ramy; and Emmy(R) Award nominated series Pen15, Shrill, and Wu-Tang: An American Saga, alongside hit series Only Murders in the Building, Nine Perfect Strangers, The Great, Little Fires Everywhere, Normal People, and Solar Opposites; Oscar(R) and Emmy(R) nominated documentary film Minding the Gap, Golden Globe-Award winning and Oscar(R) nominated THE UNITED STATES VS. BILLIE HOLIDAY, and critically acclaimed Hulu Original films VACATION FRIENDS, PALM SPRINGS, RUN and HAPPIEST SEASON. The service also streams live news, entertainment and sports from 20th Television, The Walt Disney Company, NBCUniversal, CBS Corporation, The CW, Turner Networks, A+E Networks and Discovery Networks – available all in one place.

What do you think? Are you a fan of the Futurama TV series? Are you looking forward to watching the new episodes on Hulu?

Ironic that they show a graphic of Bender saying “we’re back baby” … and he’s the one who’s NOT back…at least as of now.

Can’t wait for y’all to watch!