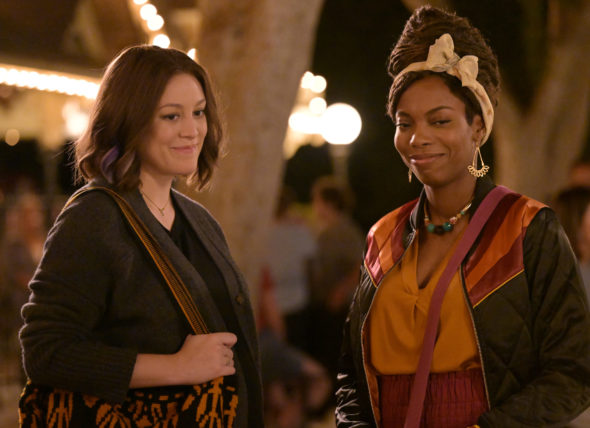 New challenges face the Hayworth family in the third season of the Home Economics TV show on ABC. As we all know, the Nielsen ratings typically play a big role in determining whether a series like Home Economics is cancelled or renewed for season four. Unfortunately, most of us do not live in Nielsen households. Because many viewers feel frustrated when their viewing habits and opinions aren’t considered, we invite you to rate all of the third season episodes of Home Economics here.

An ABC family comedy series, the Home Economics TV show stars Topher Grace, Caitlin McGee, Jimmy Tatro, Karla Souza, Sasheer Zamata, Shiloh Bearman, Jordyn Curet, Chloe Jo Rountree, JeCobi Swain, and Lidia Porto. The show looks at the heartwarming yet super-uncomfortable and sometimes frustrating relationship between three adult siblings of the Hayworth family. Connor (Tatro) is the youngest and most successful sibling in the family, running his own private equity firm. His marriage has also fallen apart and he has a daughter named Gretchen (Bearman). Tom (Grace) is the middle sibling and is a middle-class author who is struggling. He is married to Marina (Souza), a former attorney, and they have three kids, including Camila (Rountree). Sarah (McGee) is the eldest sibling and an out-of-work child therapist who’s barely making ends meet. She is married to Denise (Zamata), a teacher, and they have two kids (Swain and Curet). The family lives in a cramped Bay Area loft.

What do you think? Which season three episodes of the Home Economics TV series do you rate as wonderful, terrible, or somewhere between? Do you think that Home Economics should be cancelled or renewed for a fourth season on ABC?

Love, love, love Home Economics! The family dynamics keep me rolling on the floor laughing. Every character is true to self and consistently funny. The look of the show is beautiful and has the look more of a feature film than a normal boring over-lit sitcom. Keep up the great work!! Hoping this continues for many more years.