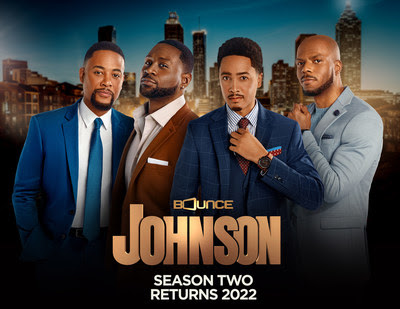 Johnson is ending its first season on Bounce TV this Sunday night, and the cable channel has now ordered a second season for the dramedy series.

D.L. Hughley, LaRay, Jones, Philip Smithey, and Derrex Brady star in the TV show which follows four life-long best friends who deal with life while being Black. The series will return with its second season at some point in 2022.

Bounce TV revealed more about the renewal of the Johnson series in a press release.

“Johnson earned more than two million viewers across its debut in August 2021, setting a Bounce viewership record for a half-hour series. Johnson’s first season finale will air this Sunday, Oct. 3, at 8 p.m. ET with a primetime play for the west coast at 11 p.m. ET/8 p.m. PT. All episodes are available on Bounce’s streaming service Brown Sugar.

Johnson is a dramedy that focuses on life-long best friends, all of whom share the same last name, centering around their intriguing and sometimes complicated journey of love, friendship, heartbreak and personal growth. Told from the Black male perspective, but inclusive of all men, the series looks to shine a new light on hot-button stereotypes and misconceptions. Shot in Atlanta, the show integrates the culture of the city by featuring some of its most popular landmarks into storylines.

“Deji LaRay and Thomas Q. Jones created a show by-and-for African Americans, giving viewers an authentic and heartfelt peak into life for Black males in today’s society at a time when it is hugely important and relevant,” said David Hudson, Head of Original Programming for Scripps Networks. “The show was immediately embraced by viewers and became a can’t-miss hit that sparks huge social media commentary and conversation every week.”

“We set out to create a show with relatable characters that tackled tough conversations in an entertaining way, and I’m happy that has resonated with our audience,” LaRay said. “We can’t wait to show how these characters are evolving and how they will navigate life’s challenges and conflicts that lie ahead.”

“Deji and I felt that showcasing our experiences as the everyday Black man was overdue, and we are grateful to our family at A Bird and A Bear Entertainment, David Hudson and Bounce for believing in us,” said Jones. “Johnson has opened the flood gates for some honest and necessary dialogue. We look forward to continuing that trend in season two.”

“If you thought season one was amazing, you ain’t seen nothing yet – season two is going to be incredible,” said Rhone.”

Check out a video teasing the return of Johnson below.

What do you think? Are you excited about Johnson being renewed by Bounce TV for a second season?

I love the show. I just wish it was an hour. Its better than some stuff on network TV. I slso love the black male perspective

I can’t wait for season. Just want to know when,