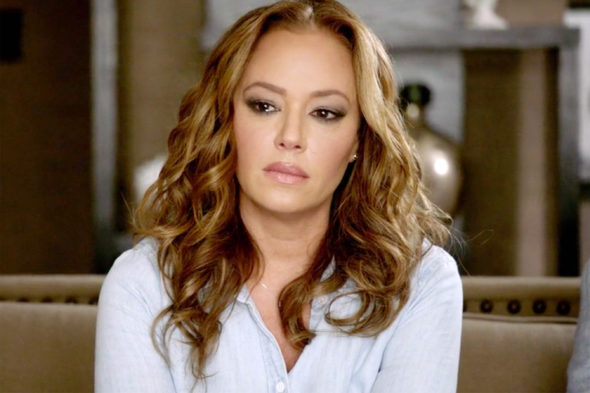 Leah Remini is moving on. According to The Hollywood Reporter, the actress’ A&E TV show Scientology and the Aftermath is ending after three seasons.

Hosted by Remini, the unscripted series features former members of the Church of Scientology discussing their experiences and what drove them to leave the controversial organization.

A final, two-hour episode of Scientology and the Aftermath will debut on A&E on August 26th.

We’re exposing so much, but we need to do some other things to bring the fight to a different level. We did not plan on more than a season or two. I always thought it would be six or eight episodes and that would be enough for the FBI, local police and the IRS to start doing something about it — or at the very least revoke their tax exemptions. People kept telling us more stories, and we had to tell them, but there’s only so much you can do in this forum and in this way.”

What do you think? Have you seen Scientology and the Aftermath? Will you watch the series finale?

This was a brilliant docu-series that really deserves the highest praises and awards for “investigative journalism.” It rose to a level of credibility and presentation that hasn’t been seen on television, possibly, ever before and should be an icon and landmark in how these kind of series are presented in the future.

Mike Rinder has and has always had a website about Scientology and ex Scientologists. I believe that both Leah and Mike will keep fighting but on another level from now on. Hopefully the bug the heck out of the FBI, IRS and the Hollywood LAPD and Clearwater PD. Until we change the minds of law enforcement, IRS and the police departments bought off by COS nothing will happen.

Some form of government needs to step in and take away this cult’s exempt status! No religion requires payment to learn about it or be a part of it. Religions don’t require anyone to spy on people either. Scientology is NOT a religion or a church. COS is only a cult that hurts the world!

I appreciated this series and the courage of those coming forward. It is sad that it was not enough to convince the irs to react.
I pray Leah fights always until action can be taken .

Really dumb of Leah Remini to quit Scientology And The Aftermath. Why would she quit? It makes no sense. What a shame. I bet Mike Rinder was not real happy about. What is she afraid of.

Chris Ostendorf, it sounds to me like Leah and Mike are “moving on” together. Not necessarily quitting. What I am hearing from this, is that they feel that they have done as much as they can through this outlet. Now they’re going to work on it from another angle. I honestly don’t think either one of them will ever give up on the fight because they are much to passionate about it.

They have been plagued by this so-called church with hatred, followed, discriminated against by people from this cult, shunned by people in this cult and many other things. No religion treats people like this cult does nor does a real church require anyone to pay to learn about the teachings of the particular religion except COS. Mike Rinder quit first and so should every single person that entered their doors. They are not a church or even a religion. They are not clearing the planet of anything. They just keep scamming money from people and hating anyone they disagree with.… Read more »

I hope A&E reconsiders continuing this important show; its serves to highlight a criminal organization committing crimes using religion as it’s shield to protect themselves. I feel so sorry for those have suffered and those who are going to suffer by a ridiculous organization that mind washes people in order to get their money. This needs to be kept alive in the public eye!

This show was awful and pointless. So boring, and such a waste of time. Its bigotry and hate at its best. I dare anyone to do this same show regarding any other recognized religion. She is one bitter woman, that seems to want nothing more than to hang onto a wrapped up acting career. AWFUL!

The above comment brought to you by the Church of Scientology. What, the other forms of intimidation not working? You waste 30 years of your life following a crackpot and dumping cash into a pernicious fraud and see how not bitter you’d be.

Not Convinced
Reply to  Aggromemnon

There were real people being persecuted by real morons based on ideas from this stupid show. Glad its over. HAHA

Honeydog
Reply to  Not Convinced

Allow me to translate…there were Scientologist being questioned by non-Scientologists based on ideas from this unfortunately factual show. Scientology is glad it’s over. Whew.

I am saddened that this show is ending. I am under the impression that the scientology cult must have gotten to the network. Leah and Mike have done a heroic and amazing job and have put themselves in more jeopardy than ever before. I just really thought A&E had more guts and were not afraid to make a difference. I think it’s just too bad that they caved. I pray the Leah and Mike will continue to try t take down this horrible cult organization even though others give up.