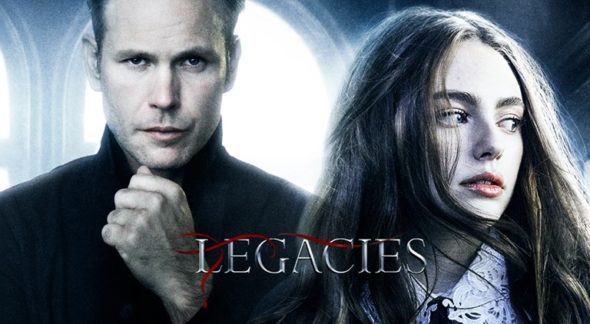 What will the students learn in the second season of the Legacies TV show on The CW? As we all know, the Nielsen ratings typically play a big role in determining whether a TV show like Legacies is cancelled or renewed for season three. Unfortunately, most of us do not live in Nielsen households. Because many viewers feel frustration when their viewing habits and opinions aren’t considered, we invite you to rate all of the second season episodes of Legacies here. *Status update below.

A CW supernatural drama, the Legacies TV show stars Danielle Rose Russell, Jenny Boyd, Kaylee Bryant, Quincy Fouse, Aria Shahghasemi, Peyton Alex Smith, with Matt Davis. A spin-off of The Originals (which is a spin-off of The Vampire Diaries), this show is set in the Salvatore Boarding School for the Young and Gifted in Mystic Falls, a haven for supernatural beings to learn to control their impulses and abilities. Typically a school for vampires like MG (Fouse), werewolves like Rafael (Smith) and witches like twins Lizzie (Boyd) and Josie (Kaylee Bryant), the kids and their beloved headmaster Dr. Alaric Saltzman (Davis) were stunned to come face to face with a series of monster and creatures they had only ever heard of in myth and lore — a dragon, a gargoyle, and the Headless Horseman. The evil behind the real-life resurrection of these formerly fictional beings proved to have a horrifying connection to the school’s newest student, Landon (Shahghasemi). This led his first and only love, Hope (Russell), the school’s shining star, to sacrifice her place at the school — and in the world — to protect Landon from a terrible fate. In season two, Hope tries to find her way back to the school she has learned to call home and the friends she has learned to love like family.

What do you think? Which season two episodes of the Legacies TV series do you rate as wonderful, terrible, or somewhere between? Do you think that Legacies on The CW should be cancelled or renewed for a third season? Don’t forget to vote, and share your thoughts, below.

Great show for all ages! To bring back others like Klause isnt an option because in real life all the original vampires and actors from Vamp Diaries age. How can these vamp kids in Legacies stay a teen is going to be an issue which I’m sure these amazing writers can address. What ever the ratings are / high or low guides the networks into canceling or renewing. I wouldn’t make a big deal about ratings. As we know TV is a bit different. I can record Legacies then watch when I have time. Does recording count? The CW is… Read more »

….cant wait for the 3rd season..plzzzzz i m really exited to see 3rd season of leagacies ..nd plzz bring back klaus ..want to see him in legacies

Love it. Hoping for a renewal.

I loved The Vampire Diaries and The Originals I also really love Legacies please don’t cancel it I look forward to i every week.

I have been a fan of the vampire diaries, originals, and now legacies. I love it it should have klaus mikelson back from the death.

Keep it coming LOVE IT

Love love love it. Been a huge fan of Vampire Diaries and The Originals. Please give us more. Can’t wait to watch every week!

Ive been a huge fan of all 3 shows. I really hope they can bring some other originals and vampire diaries characters to legacies. Can’t wait to see if they do. Freya was a great start.

I love this show! I Have watched vampire diaries and originals and now legacies. Definitely more seasons. Wish there were more seasons of originals coming too

Love this show!! But i really miss “the originals” :((

Me too. Sooo much

Definitely love this show, there must be more seasons

Actually a really good show. Enjoy watching it a lot!