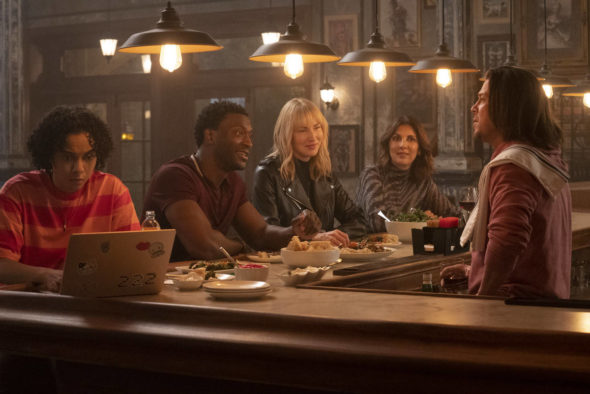 “The con is on.” IMDb TV has announced a premiere date for the new Leverage: Redemption series, a sequel to the original Leverage TV show which aired for five seasons and 77 episodes on TNT. The new show debuts on July 9th and there will be 16 episodes, split into two groups that will be released in Summer and Fall 2021.

Leverage: Redemption picks up eight years later and many members of the original team reassemble to help those who need them — Sophie Devereaux (Gina Bellman), Parker (Beth Riesgraf), Eliot Spencer (Christian Kane), and Alec Hardison (Aldis Hodge). They are joined by Harry Wilson (Noah Wyle), a corporate lawyer who is looking for redemption, and Breanna Casey (Aleyse Shannon), Hardison’s foster sister who has a knack for computers, robotics, and trouble.

Here’s more about the show, as well as a teaser from IMDb TV:

In this new iteration, and new world, the Leverage crew have watched as the rich and powerful continue to take what they want without consequence. Grifter Sophie Devereaux (Gina Bellman), thief Parker (Beth Riesgraf), hitter Eliot Spencer (Christian Kane), and hacker Alec Hardison (Aldis Hodge) have watched the world change over the last eight years. Since their last job, it’s become easier – and sometimes legal – for the rich to become richer and the powerful to squash anyone who gets in their way. To address the changes in the world around them, the team finds new blood in Harry Wilson (Noah Wyle), a corporate lawyer who is looking for redemption after realizing he’d been sitting on the wrong side of the table for his entire career, and Breanna Casey (Aleyse Shannon), Hardison’s foster sister who has a knack for computers, robotics, and getting into trouble.

IMDb TV uniquely offers premium Originals on a free streaming service including the two recently launched docuseries Moment of Truth and Top Class: The Life and Times of the Sierra Canyon Trailblazers. Additional IMDb TV Originals from Amazon Studios coming to the service include a Bosch spinoff, the second seasons of Alex Rider and Top Class, the comedy series Sprung, and the Untitled Judge Judy Sheindlin Project – the streaming debut for no-nonsense, expeditious Judge Sheindlin and her signature adjudication style.

· Expansive Catalog: IMDb TV is a modern television network, offering viewers ambitious originals and an always updating library of broadly appealing hit movies and TV shows that customers would expect to see on a paid service. IMDb TV adds new titles to the service every month across a wide selection of genres including comedy, family, romance, thrillers, science fiction, documentaries, horror and more.

· Half the Ads: IMDb TV has half the ads of traditional linear TV.

· Instant Access: IMDb TV is available as an app on Fire TV and a free Channel within the Prime Video and IMDb apps across hundreds of devices. To use IMDb TV on Fire TV, customers can find the icon in the “Your Apps & Channels” row or using the Alexa Voice Remote, simply say “Alexa, go to IMDb TV.” IMDb TV is also available as an app on third party devices including Roku, Xbox One, Xbox Series X|S, Sony Android TV devices, Chromecast with Google TV, LG Smart TVs, PlayStation 4 consoles, NVIDIA Shield and TiVo Stream 4K.

Among Electric’s hit television series are The Librarians and Leverage, which ran for four and five seasons respectively on TNT, The Outpost which was the highest-rated program on the CW for the 2020/21 season and Almost Paradise currently streaming on IMDb TV after having premiered on WGN America.

What do you think? Were you a fan of the original Leverage TV show when it aired on TNT? Are you looking forward to watching the Leverage: Redemption sequel series on IMDb TV?

Love this series enjoy it and love it. Look forward every episode on amazon prime so excited revival premiere.