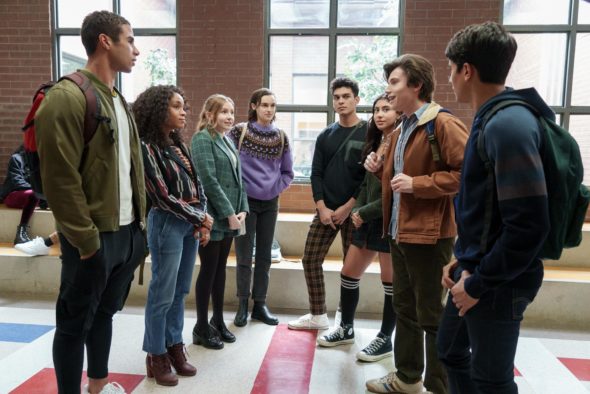 What surprises are in store for Victor and his friends in their final days of high school? Has the Love, Victor TV show been cancelled or renewed for a fourth season on Hulu? The television vulture is watching all the latest cancellation and renewal news, so this page is the place to track the status of Love, Victor, season four. Bookmark it, or subscribe for the latest updates. Remember, the television vulture is watching your shows. Are you?

Streaming on the Hulu and Disney+ subscription services, the Love, Victor TV show takes place in the same world as the Love, Simon feature film and stars Michael Cimino, Rachel Hilson, Anthony Turpel, Bebe Wood, Mason Gooding, George Sear, Isabella Ferreira, Mateo Fernandez, James Martinez, Ana Ortiz, Anthony Keyvan and Ava Capri. As the series begins, the Salazar family — blue-collar father Armando (Martinez), mother Isabel (Ortiz), Victor (Cimino), little brother Adrian (Fernandez), and younger sister Pilar (Ferreira) — has relocated to Atlanta from Texas. Despite feeling out of place at high school, Victor makes friends with classmates like his awkward neighbor, Felix Westen (Turpel), quick-witted Mia Brooks (Hilson), and media-obsessed Lake Meriwether (Wood). On a journey of self-discovery, Victor faces challenges at home, adjusts to a new city, and struggles with his sexual orientation. Season three finds Victor not only deciding who he wants to be with, but more broadly, who he wants to be. With their post-high school plans looming, Victor and his friends are faced with a new set of problems that they must work through to make the best choices for their futures.

We don’t have to wonder about the future of Love, Victor. It’s been announced that season three is the end. However, it’s possible that the show could be revived someday in the future to check in on where life has taken the characters. Subscribe for free alerts on Love, Victor cancellation or renewal news.

What do you think? Would you like to see the Love, Victor TV show return for a fourth season someday?