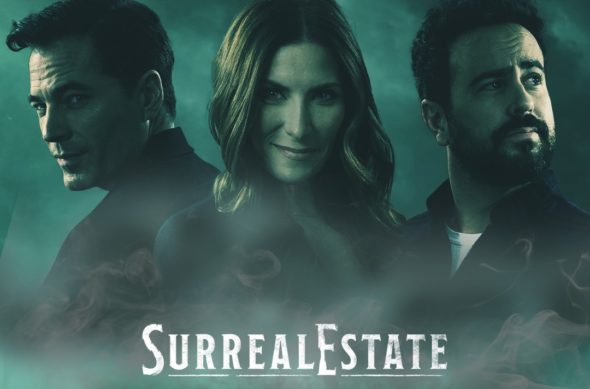 The story follows real estate agent Luke Roman (Rozon) and an elite team of specialists that handle the cases no one else can — haunted and possessed houses that literally scare would-be buyers away. Researching, investigating, and “fixing” the things that go bump in the night, the team works to create closure (and closings) even as they struggle with demons of their own.

Nick Roman is the owner of The Roman Agency, his eponymous real estate firm specializing in “metaphysically engaged” properties. He has gained a whispered reputation as someone who could sell the haunted houses that nobody else could.

Susan Ireland (Levy) is an enormously successful realtor. However, she’s a realist who doesn’t believe in ghosts or hauntings.

A research specialist at The Roman Agency, Father Phil Orley (Korson) decided to combine his keen research abilities with his understanding of spiritual matters.

August Ripley (Wint) is a technology specialist working at the company who creates devices that can detect, evaluate, and sometimes dispatch a home’s ethereal occupants.

Meanwhile, Megan Donovan (Read) is a stressed medical student who has serious doubts about her current relationship. As her life gets more complicated, she looks to sell a house that she recently inherited from her grandfather.

What do you think? Do you like the SurrealEstate TV show? Do you think it should be cancelled or renewed for another season?

I absolutely love this show. I hope you will reconsider and bring the show back. It is so enjoyable.

I really enjoyed this! I watched them all twice. A lot of fun and definitely something fresh

Hubby and I love this show! Such a new and fresh idea for the genre. Please, please bring it back!!

Please renew this show!!! It’s funny and scary and fresh and very well acted. Bring it back!!!

Honestly love it!! Bring back the show for season 2