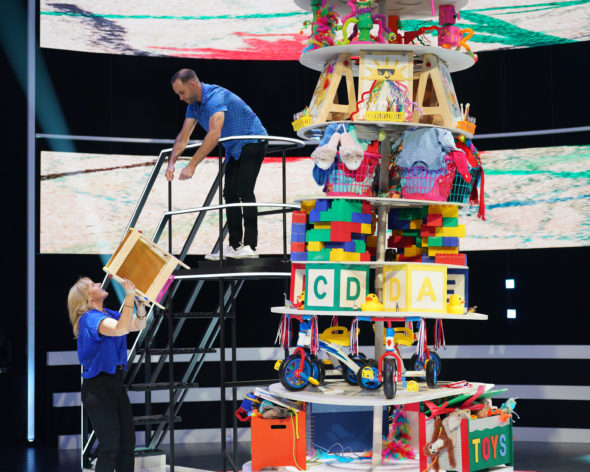 This new show might be a mess. Has The Final Straw TV show been cancelled or renewed for a second season on ABC? The television vulture is watching all the latest cancellation and renewal news, so this page is the place to track the status of The Final Straw, season two. Bookmark it, or subscribe for the latest updates. Remember, the television vulture is watching your shows. Are you?

Airing on the ABC television network, The Final Straw TV series is a larger-than-life Jenga-style competition hosted by Janelle James. Four teams of contestants compete in a battle against gravity and physics. They attempt to remove items from life-sized themed stacks which are chock full of various objects, ranging from basketballs to small kitchen appliances. The host is sometimes joined onstage by the mischievous Tipsy the Panda who is hell-bent on the destruction of the stacks. If the tower falls, that team is eliminated. The last team standing will compete against The Mega Stack for a chance to win the grand prize of $250,000.

The first season of The Final Straw averages a 0.34 rating in the 18-49 demographic and 2.42 million viewers in the live+same day ratings (including DVR playback through 3:00 AM). While these numbers don’t include further delayed or streaming viewing, they are a very good indicator of how a show is performing, especially when compared to others on the same channel. There can be other economic factors involved in a show’s fate, but typically the higher-rated series are renewed and the lower-rated ones are cancelled. Find out how The Final Straw stacks up against other ABC TV shows.

Will ABC cancel or renew The Final Straw for season two? Though the network cancelled a number of game shows earlier this year, ABC seems to be committed to keeping a number of competition series on the air. I think there’s a good chance this one will see a second year. I’ll update this page with breaking developments. Subscribe for free alerts on The Final Straw cancellation or renewal news.

What do you think? Do you hope that The Final Straw TV show will be renewed for a second season? How would you feel if ABC cancelled this TV series, instead?