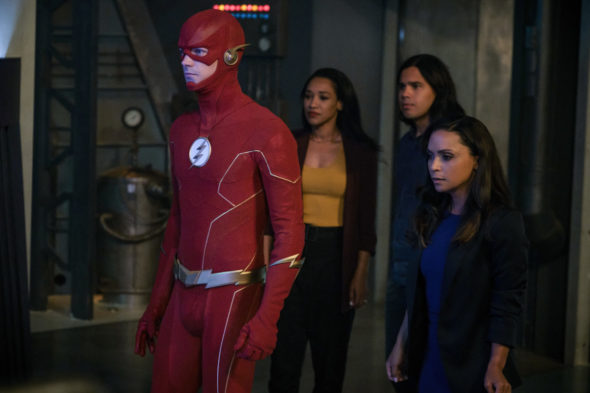 The Flash finished airing its seventh season in recent weeks, and big plans are in motion for the season eight premiere. The episode will kick off a new crossover event that will feature Arrowverse characters, past and present, as they help Team Flash fight a new alien race that is threatening Earth.

Deadline revealed the following about the plot of the event on The CW:

“In ‘Armageddon,’ a powerful alien threat arrives on Earth under mysterious circumstances and Barry (Grant Gustin), Iris (Candice Patton) and the rest of Team Flash are pushed to their limits in a desperate battle to save the world. But with time running out, and the fate of humanity at stake, Flash and his companions will also need to enlist the help of some old friends if the forces of good are to prevail.”

Those appearing in the event on The Flash include Javicia Leslie as Batwoman, Brandon Routh as The Atom, Cress Williams as Black Lightning, Chyler Leigh as Sentinel, Kat McNamara as Mia Queen, and Osric Chau as Ryan Choi. Tom Cavanagh and Neal McDonough are also returning in their villainous roles of Eobard Thawne and Damien Darhk, respectively.

Routh last appeared in his Atom role on DC’s Legends of Tomorrow in 2020. Williams, Leigh, and McNamara are from shows that have ended (or will have ended) – Black Lightning, Supergirl (in its final episodes), and Arrow. McNamara was set to star in a potential Arrow spin-off, but it has not moved forward, in part due to the pandemic. Is it possible that Green Arrow and the Black Canaries could still land on The CW?

Leigh said the following about appearing on the crossover, per The Wrap:

“What I will say is I am very, very, very grateful to be part of it. I was asked if I was interested, and if I wanted to, you know, take part and I was like, ‘Uhhh, hell yeah. I knew I wasn’t quite done with Alex or Sentinel. I just had that feeling, you know? Along the way, I was like ‘I’m just not … I’m not ready yet!”

The Flash will premiere its eighth season on November 16th.

What do you think? Are you planning to check out this new Arrowverse event on The Flash this fall?

Look forward November go be here before you know it. So good this summer season. Never missed any episode of it. Enjoy it and love it.

Are we set for yet another season of “The Iris West-Allen Show with The Flash?” Stick a fork in this show.

I would like to know in what order the episodes come?

Yes, of course. I’m a fan and I really enjoy the crossovers. So many shows we like have gone by the way, so we’re even more invested in those that remain.

I am look forward new season enjoy it and love it. Never missed any episodes of it. Really good this season.