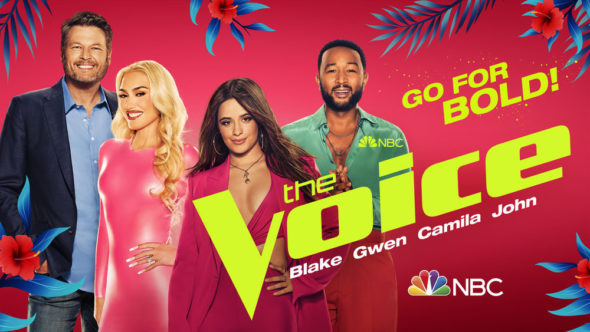 Though it’s no longer a blockbuster in the ratings, The Voice was still NBC‘s highest-rated rated show in the 18-48 demographic (admittedly, by a hair). Will the series continue to be a top draw for the peacock network? Is The Voice sure to be renewed for season 23, or could it possibly be cancelled? Stay tuned.

A singing competition series, The Voice TV show is hosted by Carson Daly and airs twice weekly — typically on Monday and Tuesday nights. John Legend, Gwen Stefani, and Blake Shelton return to coach in season 22 and are joined by first-time coach Camila Cabello. She previously served as a battle advisor to Team Legend in 2021. This season’s battle advisors are Charlie Puth (Team Camila), Jazmine Sullivan (Team Legend), Sean Paul (Team Gwen), and Jimmie Allen (Team Blake). The competition is divided into four stages: blind auditions, battle rounds, knockouts, and live performances. By the end of the blind auditions, 48 performers will have been chosen by the four coaches (12 for each team). They advance to the battles, knockouts, and live performances. In the end, only one will receive the $100,000 prize and a record deal with Universal Music Group.

What do you think? Do you like The Voice TV series on NBC? Should it be cancelled or renewed for a 23rd season?

Gwen is so obnoxious, won’t stay in her chair, she ruins the show, it used to be my favorite show to watch, but I refuse to watch it when she is a judge, I tried to watch it the first night it came on, but had to change the channel, I’m sure the ratings will go down because of her and that’s a shame that such a good show is ruined by her,

We used to really enjoy this show. I’m sorry to say we do not enjoy Gwen on the show. She should remain in her seat instead of running to Blake’s chair repeatedly or grandstanding…it’s just obnoxious. This type of behavior takes away from the show’s entertainment value. Give me Kelly or Alicia Keys back.

Disappointed! All about the judges. Insulting to the contestants. Camilla never stops talking. It is very unpleasant.. will not watch anymore!